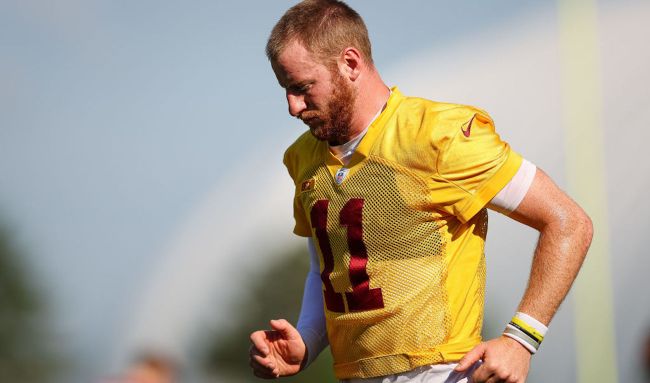 The Washington Commanders, as if they were already the butt of the joke often enough, decided to bring in embattled quarterback Carson Wentz this offseason and install him as the team’s starting quarterback.

The Commanders acquired Wentz from the Colts after spending just one seat — and less than a calendar year — in Indianapolis. While Wentz had the team in the position to qualify for the AFC playoffs with a win on the final day of the season, the Colts got embarrassed by the Jacksonville Jaguars, the league’s worst team.

RELATED: Carson Wentz Is Reportedly Struggling And Is Constantly Sailing Passes Over Receivers In Practice

Nevertheless, Washington shipped some assets to Indy in return for Wentz and now has little choice but to enter the 2022 with the former first-round pick as the team’s starting signal-caller.

According to reports out of training camp, though, Wentz has looked very Wentz-like thus far and has been struggling with his accuracy, which is even something that head coach Ron Rivera recently copped too.

What Rivera also said, though, is that the narratives surrounding the 29-year-old are “unfair.”

“And we have a lot of confidence in what we’ve seen so far. The guys have all assimilated to him. They’ve rallied around him. And that’s a huge plus because, again, based on what we went through for the last couple of years — and probably before I got here — trying to find the quarterback.” [via ProFootballTalk]

Given that the Commanders play in the perpetually disappointing NFC East, it certainly isn’t impossible to imagine Washington competing if they can get Wentz to play half-decent.