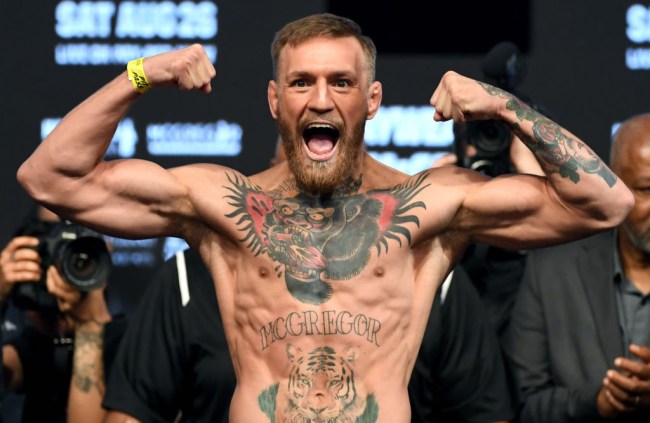 Conor McGregor returns to the UFC octagon this weekend in Vegas, fight Donald “Cowboy” Cerrone for the first fight of his UFC comeback. There’s a lot on the line for McGregor, who’s had a tumultuous last few years both inside and outside the UFC world. This fight is McGregor’s chance to prove to the world that, even at welterweight, he’s a serious contender in mixed martial arts again, worthy of the hype that helped him become one of the UFC’s top grossing fighters just a few years ago, before a fall from grace.

You’re not going to want to miss this PPV on Saturday night. And the only place to watch it is ESPN+, so click here to pre-order the McGregor fight now so you’re good to go.

Meanwhile, Conor McGregor sat down with ESPN’s Ariel Helwani in an extensive pre-fight interview airing today. The most notable piece of news is Conor’s speaking about his estimated purse for his UFC return.

It’s a staggering sum of money that Conor McGregor is estimating on banking this weekend: About $80 million.

For perspective, he says he made about $50 million for his last UFC fight against Khabib in October 2018.

McGregor pocketed $30 million guaranteed against Mayweather in 2017, with total earnings ballooning up to $100 million for his share of the PPVs.

But that wasn’t a UFC event. If Conor does make what he *thinks* he’s going to make on Saturday night, he’s looking at his biggest UFC pay day of all time.

Here’s a clip from the interview:

"They think I'm toast, Ariel, but I'm still the bread." 🍞@TheNotoriousMMA says he made $50 million for the Khabib fight and predicts an $80 million payday for #UFC246 (via @arielhelwani) pic.twitter.com/UjpLhbDBAC

For more of our fight week coverage, follow along here.