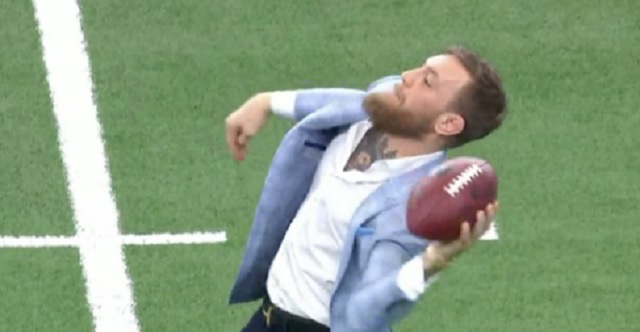 Conor McGregor took his second L in as many weeks yesterday when he attempted to throw a football and ended up looking like the kid picked last at recess. The internet had its fair share of laughs at McGregor’s expense, who attended Sunday’s Cowboys vs. Jaguars game as a guest of Jerry Jones. Look at this abomination:

Would start for Rutgers. pic.twitter.com/IY5Nm0J2v0

After the UFC star’s throw went viral, Conor took to Instagram to defend his honor and, as the marketing genius he is, use the opportunity to market his suit and whiskey companies.

Hahaha yous’r fucking ruthless on this side. I just didn’t want to rip my custom @augustmcgregor baby blue billionaire blazer.
That was all, y’all.
Great job to the Cowboys today!
It’s a Proper giddy up tonight in Dallas and I LOVE IT, see yous soon. @properwhiskey

Somewhere 50 Cent is snickering at how pathetic this throw was, and that’s saying something.