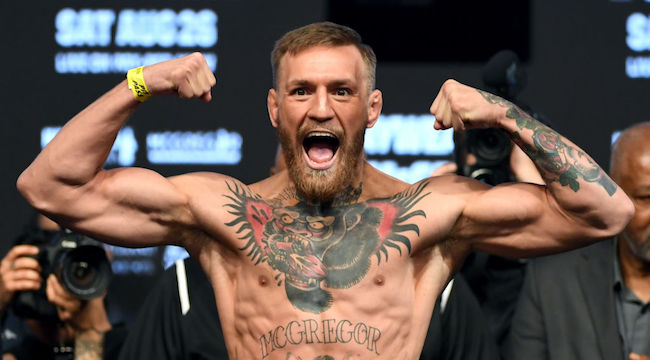 There’s a very good chance Conor McGregor goes to jail this afternoon after he caused chaos in the Barclays Center.

Earlier today it was reported by MMA Fighting’s Ariel Helwani that McGregor and his crew had attempted to confront Khabib Nurmagedov who was in a van with other UFC fighters that was headed towards the fighter’s hotal after today’s UFC 223 media event.

“They stormed the building, got down to the loading docks where the fighters were getting on buses and started to attack the buses with trash cans, dollies,” White said. “… This is the most disgusting thing that has ever happened in the history of this company.”

Thanks to TMZ Sports we now have a clear video of the incident and holy fucking shit is it insane.

One fighter who was on the bus, Michael Chiesa, was transported to the hospital with several cuts on his face.

According to multiple sources Michael Chiesa suffered a laceration in the fracas. He is being attended to at the arena. Unclear at this time how serious his injury is.

Another fighter, Rose Namajunas was visibly shaken by the incident.

Dana White tells @MMAjunkie that Rose Namajunas was almost hit, is shaken by the incident, but wasn't hurt.

White says it's "the most disgusting thing to happen in the history of the company".

There are currently conflicting reports on whether there is a warrant out for McGregor’s arrest but it’s safe to say that they will be talking to him soon after they see this video.