Jerry Jones On Board With Hosting Conor McGregor – Dustin Poirier Fight At AT&T Stadium, But Dana White Is Against It 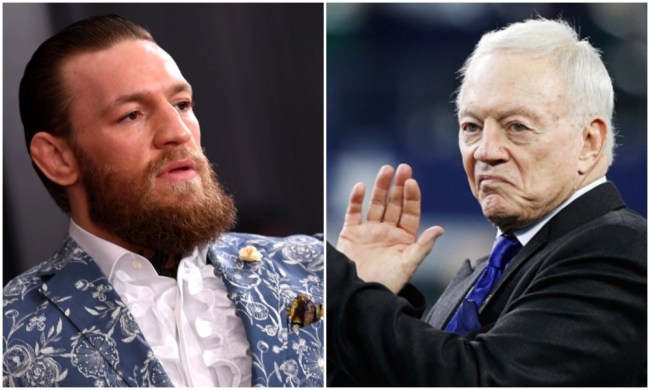 Conor McGregor tweeted on Wednesday that he has accepted a proposed fight against former interim UFC lightweight champion Dustin Poirier set for January 23. In his announcement, he also made it known that he wants the fight to take place at AT&T Stadium, the home of the Dallas Cowboys.

I accept, Jan 23rd is on!
My goal is to see this fight take place in Cowboy stadium. Proper Style! Jerry Jones is a friend and the stadium can hold our crowd. I will be ready for Texas and Texas will be ready for my fans!
Then Manny. #McGregorSportsandEntertainment

Cowboys’ owner Jerry Jones, who is never one to shy away from a big event, is on board with the idea.

The thing is, McGregor or Jones don’t really have a say in where the fight will take place, that falls on UFC president Dana White who doesn’t see this fight, or any upcoming fight, taking place inside a stadium.

White and the UFC have been hosting fights on Fight Island, a manmade island in Abu Dhabi due to the pandemic, and have found success in doing so. While speaking with the media in Abu Dhabi on Thursday, White made it clear that he’s not going to host any fights in a limited capacity stadium seemingly nixing the idea of the McGregor – Poirier match being held at Jerry’s World.

“He said, ‘yes’ and Dustin said, ‘yes,’ so now it’s a matter of getting contracts signed,” White said according to MMA Fighting. “Listen, we’ve had a very good relationship with Jerry Jones for a long time and talked about Dallas, Texas, stadium forever.

“I’m not going into any arena where we’re going to fill a quarter of the arena or half of the arena or any of that stuff, so when crowds are ready to come back we’ll do crowds again.”

It’s unclear what the pandemic may look like come the first month of 2021, but as things stand now it’s tough to imagine a stadium hosting any sporting event at full-capacity by then.

McGregor and Poirier previously squared off back in 2014 in UFC 178. The Notorious One won the fight against the Louisiana native by TKO in the first round.