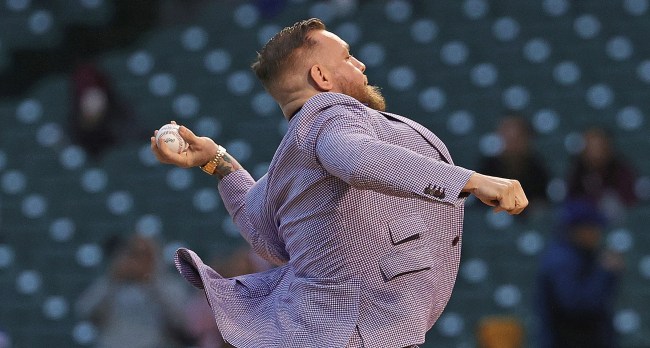 As you may have heard, UFC star Conor McGregor threw out the first pitch before the Chicago Cubs’ game against the Minnesota Twins at Wrigley Field on Tuesday.

And it was bad. Like, legendarily bad. As in, quite possibly the worst ceremonial first pitch ever thrown at a baseball game. A game which has been around since approximately 1839.

After much public humiliation, the 33-year-old tried defending himself during the broadcast.

Conor McGregor (@TheNotoriousMMA) on his first pitch: "The most devastating first pitch ever seen! The venom is there, the power is there." pic.twitter.com/GTZQDqUbeU

Then, as if that wasn’t bad enough, after also absolutely butchering “Take Me Out To The Ballgame” during the 7th inning stretch, Conor McGregor took to Instagram Wednesday night with an almost 200 word essay explaining why his terrible first pitch wasn’t as bad as 50 Cent’s (as if that’s some sort of accomplishment or something).

“The audacity to compare mine with this piss!” Conor McGregor wrote. “Picture to picture alone buries this.

“Mine, bar the accuracy, was the most powerful and fastest first pitch of any of these other athletes/artist over the years. No comparison. Smoke them up and down that Forbes I do. Get Messi over. Smoked. Cris. Smoked. Federer. Doubled. All time Most Power!

“Put me in the Wrigley hall of fame for that rocket launch. Beside some of that nice red brick. Mahogany Oak Frame. Wimbledon lines in the grass. The great Wrigley Field reminds me of the grounds on my land in Ireland. Impeccable.

“Anyway back to the pitch.. Venom. Composure. Balance! The gold bar of Patek almost came flying off me it was that fast and powerful. I’d take it back to @patekphilippe for adjusting but this watch is now discontinued. A rare. I Bought for 80k in Weirs jeweler of Ireland and today it is worth close to 500k. And going up. Fifty has a nice hublot too. Big Bang. Small bucks 50cent. One has power. One is the director of media relations for some show called power. You know what it is.”

Comments on McGregor’s Instagram defense came from all corners of the world with Usain Bolt, JWoww, Lewis Hamilton, Brett Okamoto and thousands of others getting a good chuckle along with The Notorious One.

One would think that after his abysmal attempts at throwing a football in 2018 that Conor McGregor would have at least practiced a little bit for his first pitch. That, or just said, thanks, but no thanks, when the offer was made.

Then again, the man does know how to get publicity, so…