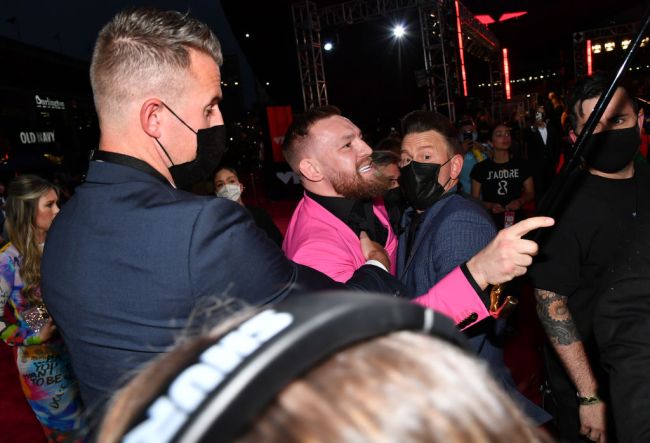 Can someone tell me what it is about Machine Gun Kelly that entices people who are out of his league to mess with him?

First, he baited Eminem, arguably the greatest rapper of all-time, into a diss track war. Then, he scored “The Sexiest Woman In The World.” Now, the former UFC featherweight and lightweight double-champion is on VMA red carpets looking like an unhinged fool.

TMZ initially reported that Conor asked MGK, who is a huge MMA fan and attended Conor’s last fight, for a photo, which Kelly denied. McGregor’s reps subsequently issued a statement claiming Conor “did not ask anyone for a picture, nor did he instigate this incident.”

Following the incident, McGregor told Entertainment Tonight that he doesn’t “know the guy,” before calling him a “vanilla boy rapper.”

“Nothing happened with me, I only fight real fighters, people that actually fight, you know what I mean,” he continued. “I certainly don’t fight little vanilla boy rappers. I don’t even know the guy. I don’t know anything about him, except that he’s with Megan Fox.”

Mcgregor trying to show MGK that Megan Fox is in his DM’s pic.twitter.com/8qH7uHDSbC

Conor McGregor went from having beef with Mayweather to Khabib to Dustin Poirier to…….Machine Gun Kelly ??? that brother cooked

Alternative opinion: McGregor’s lost 3 of his last 4 fights, is hobbling around on a cane at the VMAs, and still manages to trend worldwide and become the biggest news story of an event celebrating music, which he has zero experience with.