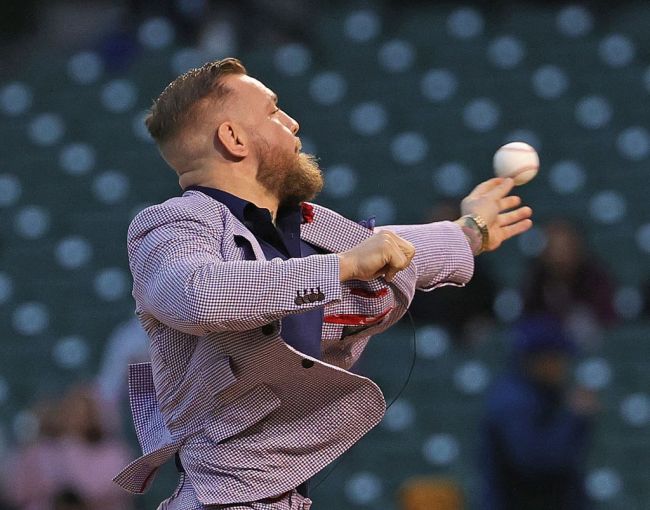 Conor McGregor instantly catapulted himself into the discussion for “worst first pitch of all-time” on Tuesday night. At the Chicago Cubs game, the UFC fighter delivered a comical, almost inconceivably bad ceremonial first pitch that must be seen to be believed.

In the past decade, we’ve seen some of the worst first pitch candidates ever, including Jake Brentz, some guy at a Boston Red Sox game, Miss Texas, Gary ‘Baba Booey’ Dell’Abate, and who could forget 50 Cent’s forgettable toss.

Now, Conor McGregor is a contender for the “worst first pitch ever.” Before the Cubs game against the Minnesota Twins at Wrigley Field, McGregor threw out the first pitch. The Irishman should stick to mixed martial arts.

The first pitch went nowhere near home plate, the catcher, or the batter’s box. Instead, the former UFC double-champ threw out the first pitch that smashed into the brick backstop of Wrigley Field.

To be fair, the 33-year-old left-hander from Dublin, Ireland, probably hasn’t tossed the baseball around very much and was wearing a tight-fitting suit. Never-the-less, the internet blasted the UFC star for his abominable first pitch. Some compared it to 50 Cent, others made memes referencing Happy Gilmore, there were commentators quoting Bob Euecker from the movie Major League, and then there were some who poked fun of MLB umpires. Many declared Conor McGregor’s ceremonial throw to be the worst first pitch in MLB history, even worse than 50 Cent and Baba Booey.

Just a bit outside. https://t.co/qoich5XCD5

Folks I’m calling this as the worst first pitch in history. It’s so much worse than 50 cent, Chris Rock, or Baba Booey because he’s a professional athlete. https://t.co/xlevlFwaXR

Conor McGregor did this on purpose, right? pic.twitter.com/6ks0BS3ORA

Man had the Rookie of Year rubberband effect in that smedium-sized suit lol https://t.co/eA9QkrXaZ9

Conor McGregor throwing out the first pitch at the Cubs game.

JUST A BIT OUTSIDE. pic.twitter.com/RaImWnuhZi

How are we rating this Conor McGregor first pitch? On a scale of 50 Cent to Baba Booey… 😅 pic.twitter.com/kUKL0VGQtk

50 CENT: My first pitch was bad

This is a huge night in the world of fighting!

Social Media Influencer Conor McGregor throws what was being called the “worst opening pitch ever” on YouTube within 6 minutes.

“It’s a shite sport. Your wife is in me DMs!” cried Conor before trying to snort the first base line. pic.twitter.com/TCYrPupcSP

McGregor fans will go to the grave arguing it was a strike https://t.co/kIh2lZaoEF

This Conor McGregor first pitch was called a strike by Joe West.😂pic.twitter.com/7UccYDffLc

There were even some people who attempted to help Conor McGregor diagnose what went terribly wrong with his horrendous first pitch.

The good: Really dragged the back foot regardless of luxury footwear. Skin-tight tailored suit, looking like Walker Buehler out there.

The bad: front side is absolutely flying open and pulls everything to the 3rd base side.