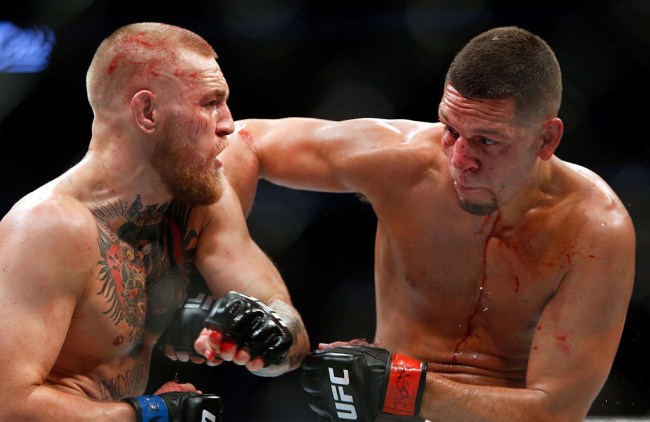 Funny how things change in sports, huh? Back in August of 2016, UFC President Dana White said when discussing a third Conor McGregor vs. Nate Diaz fight, “The war was fun and super successful but I’m movin’ on.”

Back then Nate Diaz also said, “I’m not doing shit until we go for round three. You won’t be seeing me until then. If they want to set it up as soon as possible, let’s do it. But I don’t think it’s a very good business move for him to be taking any other fights, and he’s a businessman, so we’ll see what happens.”

What happened was the Conor McGregor vs. Floyd Mayweather circus that netted “The Notorious One” a payday higher than he ever could have dreamed of getting in the UFC.

Diaz was true to his word on one thing though: he hasn’t done shit since he fought McGregor on August 20, 2016. He also might have said something else that is true based on a new report by The Independent, and that is his next fight since losing to McGregor in 2016 might just actually be versus McGregor again.

…now after taking a sabbatical following the birth of his first child – and a foray into boxing to fight Floyd Mayweather – it appears that the Notorious is close to returning to the Octagon.

The Sunday World is reporting that McGregor is very close to signing a deal to take on Nate Diaz in a deciding fight on December 30 in Las Vegas – and that his friends and family are so sure of the fight being announced that they have already booked flights to Sin City.

McGregor, other than boxing Floyd Mayweather, also hasn’t fought inside an octagon for almost a year. His last pure MMA fight was back in November of 2016 when he became the first UFC two-weight world champion by knocking out Eddie Alvarez at Madison Square Garden.

While most every fight fan would be thrilled to see these two warriors go at it for a third time in “the war to settle the score” (feel free to use that, Dana), one has to wonder how much ring rust these two guys will have in December, putting both fighters well past a year since their last bouts.

It will also be interesting to see if Diaz gets the $20 to $30 million for the fight that his coach believes he is due.