Conor McGregor Made A Crazy Bold Prediction Back In 2016 And Amazingly, It’s Actually Coming True 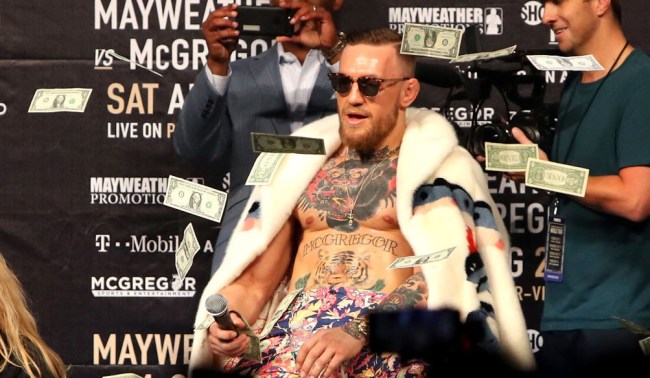 Back in 2016, well before any talk of a potential megafight with Floyd Mayweather ever hit the media Conor McGregor made a seemingly ridiculous comment slash prediction about his life in 2017.

Prior to his UFC fight with Nate Diaz, McGregor met with soccer superstar Cristiano Ronaldo who had taken the top spot on Forbes’ highest paid athlete list for 2016 with a whopping $93 million in earnings.

At that time, while McGregor was making a generous living earning one of the highest incomes of any fighter in the UFC, he was not within sniffing distance of the kind of money Ronaldo was making. Which makes what he told Ronaldo when they met sound more like a joke than a prediction…

“You were number one on the Forbes list,” McGregor told Ronaldo in a video posted to the Dubliner’s website The Mac Life last year.

“I was like number 35 or something. I’ll get up. Maybe next year I’ll get you.” Before Ronaldo replied: “I don’t think so.”

Looks like Ronaldo is going to have to eat those words now as “The Notorious One” is set to rake in over $100 million just from his fight with Mayweather plus any additional income he will receive in sponsorship and endorsements, of which there are many.

Rob Pearson, Associate Director at Teneo PSG, says that McGregor will pass Ronaldo on next year’s list and that he could earn as much as $60 million (€50 million) in 2018 after earning $34 million (€28.4 million) last year.

“By stepping into the ring with Mayweather, McGregor made more in one night than Cristiano Ronaldo, the highest earning athlete in 2016, made in the entire year.

Heck, McGregor, as anyone who saw the post-fight press conference knows VERY WELL, is already launching his own line of whiskey and has gone into partnership with the folks who made his infamous “F*ck You” suit.

Oh, and of course, there was his brutal toothpaste ad, which probably earned him a few bucks as well. That one might not be a long-term proposition though. At least I hope not.

McGregor won’t even have to fight in 2018 and he’ll still be one of the highest paid athletes, according to Pearson…

“While the odds are against him ever landing a bigger one off payday he looks poised to cash in on his enhanced celebrity status with potential sponsorship earnings in 2018 of $30 million and a minimum of $10m for every time he steps in the octagon – $60m in 2018 is on the cards.”

I guess the next time Conor McGregor makes a wild prediction perhaps we’d all be wise to believe him.