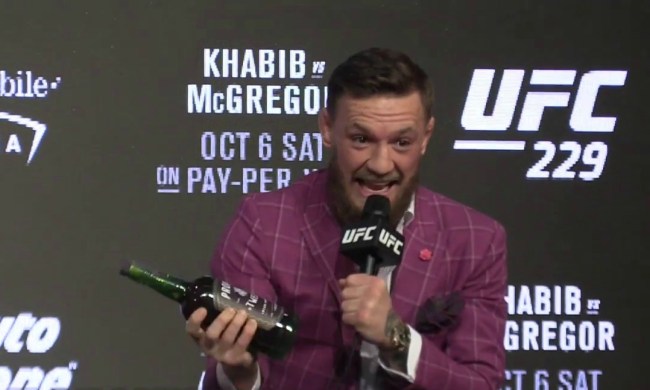 Sure, Conor McGregor may have just lost to Khabib Nurmagomedov a couple weeks ago, which led to a melee in the Octagon that even saw a fan jump into the action — and then detailed it. But, even though McGregor isn’t walking with as much swagger as he typically does, doesn’t mean he’s completely down in the dumps.

Hey, when it’s been reported that he walked away with an estimated $50 million from losing that recent fight to Nurmagomedov, per MMA Junkie, what’s there to really be pissed about, right? I’d say most of us would get our face smashed in for that kind of paycheck — even if it caused permanent damage.

With the Notorious MMA having lots of cash at his disposal, he did a pretty cool bro move today when he made his way to the Back Bay fire station in Boston, surprising 10 firefighters with some Proper No. Twelve whiskey and, even more dear to their hearts, tickets to the World Series in Fenway Park.

In addition to the whiskey, which is McGregor’s own brand, the company pledged to donate $5 for every case that’s sold to local first responder organizations and charities.

Check out the video of McGregor’s random act of kindness below.

After the Boston Red Sox beat the Houston Astros in the ALCS last night, I’d imagine those World Series tickets weren’t exactly cheap, so good on McGregor for showing respect to the firefighters to give them something that, seemingly, everyone in Beantown is coveting right now.

I don’t necessarily have an opinion of Conor McGregor, but the fact that he did something like this makes me want to like him more, I suppose. I get the whole bad boy image is an act a lot of times prior to a fight, so it’s always pretty awesome when sports stars humanize themselves a bit by sharing their wealth with other people; especially when it’s random.