Conor McGregor Got Cornered By Some Drug Dealers After A Wrong Turn, But It Wasn’t What He Thought 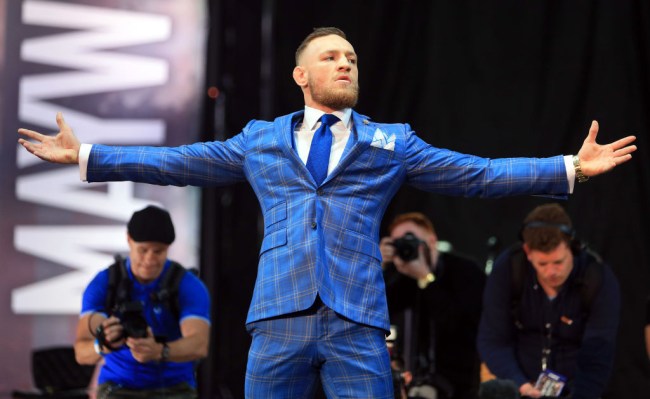 Conor McGregor’s rise to fame has been very well documented, even by the man himself while on his “World Tour” with Floyd Mayweather. And it’s going to get even more documented since there is now a film about his life coming out soon.

However, this story that was included as a part of a very in-depth piece by Wright Thompson for ESPN is one I am betting most of you haven’t heard before.

In Thompson’s profile of McGregor he touches on McGregor’s roots in Dublin and the relationship he still has with the people who see him as their working-class hero.

McGregor loves tweaking Dublin’s two-tiered society; this spring, he bought a boat and parked it in a snooty marina in a snooty coastal town, near where U2’s Bono and The Edge live. He named it The 188, which is the amount of the weekly welfare payments he got until he started making money in the cage.

That being said, even McGregor knows that there are certain neighborhoods where discretion is the better part of valor. Which is why when he took a wrong turn in north Dublin just before Christmas he wasn’t sticking around as a group of drug dealers started to gather in front of his white BMW.

They couldn’t believe it. Sheriff Street was among the worst streets in the city, blocked off at one end, the area controlled by one of the two local gangs. The Hutch family ran this part of the north side, while the Kinahans operated mainly in the neighborhoods south of the river dividing the town. Some of the Kinahan bosses and foot soldiers lived in Crumlin, where McGregor grew up. The two gangs were in a bloody feud that had Dublin on edge and the newspapers keeping score: 10 killed by the Kinahans, two killed by the Hutches. McGregor started to slow down. The dealers stepped out into the street, blocking his escape.

A woman is telling me this story, standing in the corner store on a street that a local crime writer calls the Hutch family’s “Alamo.”

“He’s from the south side,” she explains. “He’s not from this side.”

Down the road, there’s a festival going on. An organizer there unloads crates of bottled water and, when asked, gives more details about what happened next. “I’m telling him about the night McGregor drove into Sheriff Street by accident,” he says when a woman joins him.

“And all the kids was running,” she says.

“All the gang was standing outside the chipper selling gear,” he says. “When he drove past the chipper, all the youngsters said, ‘Hey, McGregor!’ And when he got to the end of Sheriff Street, he realized there was no way out and he done a U-turn. And when he was doing a U-turn, three or four of ’em got out in the middle of the road. The feud was up and running.”

McGregor hit the throttle and roared down the street. Drug dealers scrambled to whatever safety they could find as he sped through the intersection.

The kicker? It turns out that McGregor had nothing to be afraid of, the drug dealers didn’t want to do him any harm. In fact, they all had their phones in their hand. Because they wanted to take his picture.

Check out the rest of the piece over at ESPN where there is much more on McGregor, his upcoming fight, his training and the dichotomy between how his countrymen feel about the man versus how the media treats him there.