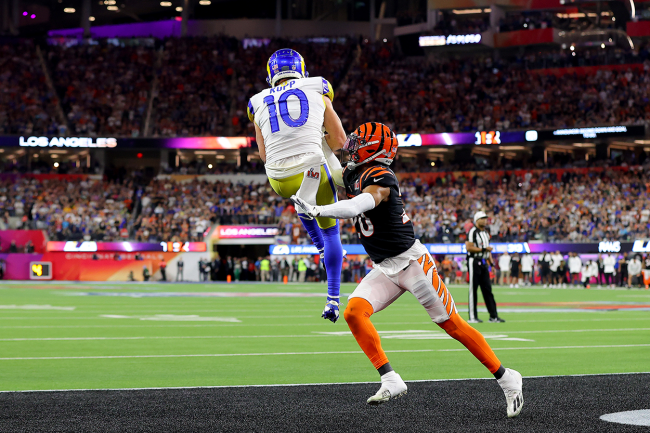 Rams wide receiver Cooper Kupp capped what can easily be considered the single greatest receiving season in NFL history with a Super Bowl MVP on Sunday. After the game, he provided an incredibly-detailed explanation of what became the game-winning touchdown.

Kupp led the NFL in receptions, targets, receiving yards, receiving touchdowns and yards after catch in 2021. Although he had an extra game to rack up the numbers, he sits firmly near the top of all-time leaderboards and it cannot be dismissed.

In the playoffs, Kupp averaged more receiving yards per game and caught a high percentage of his targets than the did in the regular season. He also set a new NFL record for the most catches in a single postseason run.

While all of that is well and good, it doesn’t necessarily win football games.

None were more important than his last.

With one minute and 25 seconds left in the game, down by four, Kupp lined up on the right side and burnt Eli Apple for six. Rams kicker Matt Gay added the PAT and Los Angeles went on to win the Super Bowl by three.

After the game, Kupp spoke to the media about his go-ahead score. Instead of just giving a generic answer about how he was in the right place at the right time, the 28-year-old broke down how to win a goal line fade.

There are five steps:

With one of his sons in hand, here is how explained the game-winner:

This is not the first time in 2021/22 that Kupp made waves for his detailed explanation. Earlier in the year, he gave an incredibly detailed interview answer that just kept going.

Kupp clearly knows the game of football and it shows. What a year.