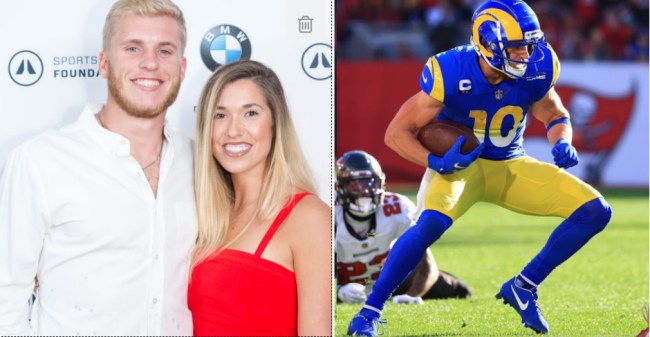 On Sunday, LA Rams wide receiver Cooper Kupp helped his team beat the Tampa Bay Bucs to advance to the NFC championship game, but none of that would have been possible if his wife hadn’t supported him through college.

While Kupp was a wide receiver at Eastern Washington, Anna Kupp worked full time at a restaurant to financially support him so that he could focus on his NFL dream.

For all the success he’s having this season, Rams receiver Cooper Kupp says he wouldn’t even be in the NFL if it wasn’t for his wife, Anna. https://t.co/oHl6FlAl9B

After football practice, Kupp drove his white Nissan Pathfinder — often with teammates in passenger seats hoping their ride wouldn’t experience one of its infamous breakdowns — across the Eastern Washington campus from the red-turf Roos Field to the restaurant, where a special someone would be expecting him.

Behind the cash register or serving orders in Styrofoam containers, his wife, Anna Kupp, worked her first job.

“I supported us monetarily through college,” Anna said, laughing, almost in disbelief she pulled it off. “I was working full time so that he didn’t have to worry about that, so that he could focus.”

Cooper’s goals pertained to football, and he discovered after a summer of morning workouts followed by an afternoon landscaping gig that he felt exhausted when the season rolled around.

Football, along with school, had to be his full-time job. Anna supported and sacrificed, while also attending college, in every way she could.

Cooper acknowledged that he probably wouldn’t be in the NFL if it weren’t for his wife’s sacrifices.

“Without a doubt, there’s no doubt in my mind, not only would I not be here where I am today without her or accomplishing the things that I would be doing,” Kupp said. “I really believe I may not be in this — I may not be in the NFL if it wasn’t for her and what she has inspired in me and pushed me to do.”