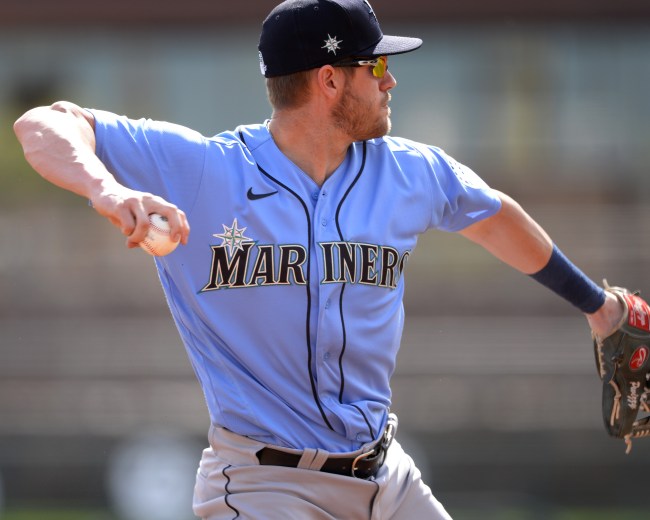 Coronavirus has the entire world on edge right now, with people washing their hands every 15 minutes, trying to avoid human contact as much as possible, and even making homemade hand sanitizer with vodka because it’s flying off of shelves. Needless to say, everything is in flux until this threat of a global pandemic (hopefully) subsides soon — yet a coronavirus vaccine may still be at least a year away, so this paranoia could last longer than we all want it to.

Other than our own everyday lives being compromised, coronavirus has also impacted things like big-time events and sports games, with the Serie A season already impacted because of the aggressive spreading of the virus in Italy. There’s talk of something similar happening in the United States, too, with all major sports leagues keeping an eye on the situation as they try to protect players and fans from potentially spreading germs.

One of the pro sports teams most impacted by all of this is the Seattle Mariners, who reside in the most infected coronavirus city in the United States right now. As of press time, positive cases of the COVID-19 in the Seattle area sits at 190, with 22 deaths in and around the city, per Stat News. It’s terrifying for anyone nearby, which is why MLB is seriously considering having the M’s play regular season home games at their spring training facility in Peoria, Arizona at the Peoria Sports Complex.

According to a recent article in The Athletic, MLB doesn’t want to take any risks, and, therefore, may consider having the Mariners play in the 12,000-seat stadium.

If government officials impose restrictions that prohibit events on the scale of Major League Baseball games in the Seattle area, the Mariners could temporarily play their home games in Arizona at their spring training facility, people familiar with the contingency plans said on Tuesday.

For example, the Mariners could play some home games in Arizona, and perhaps others at a road stadium in another major-league city, depending on the length of any potential absence from Seattle.

With Washington State Governor Jay Inslee putting a movement in place to restrict gatherings of more than 250 people to help stop the spread of coronavirus, it’s the Mariners who could be hit the hardest in the short-term, as their regular season is set to kick-off in Seattle on March 26. It’s wild to think the team would play in such a small stadium, but this is where we’re at with precautions.

The idea to move Mariners games comes at the same time of reports that the NBA would consider suspending operations should a player test positive for COVID-19, as well as seriously looking at playing games without fans. It’s a wild and uncertain time for people, isn’t it?