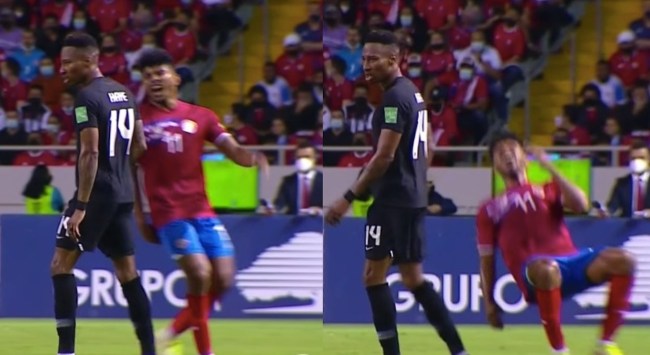 For the sake of transparency, it’s important to know that I identify myself as a rather big soccer fan. Thanks to my Pops getting a job in Liverpool about five years ago, I began rooting for the Reds and I never looked back. It’s now (and frankly always was since it’s what I played growing up) my sport and I love it. You know what I don’t love, though? People who pretend to be angry about whether it’s called soccer or football — call it whatever the hell you feel comfortable with. I use both depending on who I’m speaking to, for example.

But even more than people pretending to get upset about other people’s vocabulary, the thing that I hate most about soccer, by FAR, is the flopping/diving. Well, and also the quality of officiating in the Premier League, but that’s another article for another day.

Diving is so vile because it’s effectively a black mark on the sport whenever it happens. They’re known as the “dark arts” for a reason. So, when I say that Costa Rican winger Johan Venegas is an embarrassment to the sport, I truly mean it: players like this make the game worse.

To make matters worse, not only was Venegas able to fool the referee into giving the foul but it also resulted in Canada’s Mark-Anthony Kaye getting a second yellow card, which results in a red card and dismissal from the game. The entire landscape and trajectory of the match were altered because Venegas cheated and the referees bought it — there’s simply no other explanation for it.

Not long after Kaye’s red card — 12 minutes, to be exact — Costa Rica took a 1-0 lead right before halftime, with that lone goal proving to be enough to win the match. With the win and the three points, Costa Rica moved up to fourth in the CONCACAF standings with 19 points. The top three teams in CONCACAF — which are currently Canada (25), USA (22), and Mexico (22) — will qualify for this fall’s World Cup in Qatar.