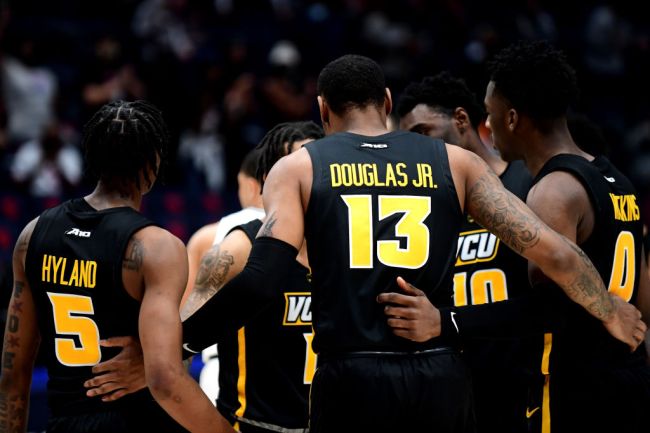 Well, it happened. Oregon basketball is moving on to the Second Round of March Madness in unusual fashion. Virginia Commonwealth, its First Round opponents, have been forced to withdrawal due to COVID-19 concerns and the game will be ruled a no contest.

The NCAA MBB Committee has declared the VCU-Oregon game a no-contest because of COVID-19 protocols.

As a result, Oregon will advance. pic.twitter.com/75PFpk8TbC

The NCAA released its COVID-19 protocols a few weeks ago, which allowed teams to play without coaches or a bench, so long as it had five players to take the court. Numbers have not been released, but in this instance, VCU had enough players to suit up. The team was reportedly forced to forfeit due to the recent nature of the positive tests.

Sources: The recent nature of VCU’s multiple positive tests ultimately led to the decision to cancel the game. The school had no COVID-19 protocol violations in Indy, so it’s unclear where the positive tests came from. They’ve been in Indianapolis since Sunday night.

“We’ve been tested every day for the past three weeks, but within the past 48 hours we’ve received multiple positive tests. We are devastated for our players and coaches. It has been a dream for all of us to play in the NCAA Tournament. We appreciate the care of our doctors and administration this year, and all our efforts and attention will be put into our players at this time. Life isn’t always fair, but it’s about how you deal with it and move forward,” he said.

The team leaves a lot of questions unanswered. If the team was tested every day for three weeks without a positive test, what is the root of a 48-hour outbreak? If the outbreak is significant enough to take out the Rams in a matter of 48 hours, did it reach any of the other teams that were being housed in the same hotel and playing at the Indiana Farms Coliseum?

While we may not ever know where the positive tests originated, the belief is that the outbreak is related to their hotel for the conference tournament last weekend.

A source close to the Saint Bonaventure program regarding the A-10 tourney. Bonnies played VCU Sunday in title game.

“There was high school state tournament going on at Dayton – Saturday before our game. Kids, fans and parents were there — not following rules.”

CBS Sports is reporting the same.

“The hotel was packed,” a source told CBS Sports. “They had some sort of other tournament there. People not adhering to protocols, walking through the hotel and lobby without masks. There were people there that weren’t from the A-10. The NCAA can control who’s there, who’s in the buildings, in the hotels, in the convention center. You have to have a credentials that have your picture on it that you wear around your neck everywhere you go. Everyone has to wear masks, four people to an elevators, no congregating in the lobbies. The NCAA has complete control of what’s going on.”

This was not entirely the case at the Dayton Marriott.

“There was some [other] event there,” the source added. “There were kids, parents and people with differences of opinion [about COVID-19] and the hotel staff — I witnessed the ladies at the check-in yelling to people walking through the lobby about putting their masks on.”

This math adds up. Roger Ayers, a referee who tested positive for COVID-19 on Monday and was also sent home, officiated the Atlantic-10 Tournament Championship. That game took place between VCU and St. Bonaventure less than seven days ago. Ayers has reportedly been struggling with the virus all week.

What we do know is that it was not by any fault of the athletes or officials.

VCU's Ed McLaughlin: "This isn't something where our team broke protocol and did the wrong thing. We don't know how this happened, but it certainly wasn't bad behavior on our side. It's brutal."

No matter what the answers are, you can’t help but feel horrible for the athletes. Nah’Shon “Bones” Hyland is a walking bucket that could single-handedly lead a run to the later rounds, and the seniors who came back after last season’s tournament was cancelled will not get the chance to play again this year.

VCU players were obviously distraught after being told that they weren’t going to be able to play in the NCAA tournament, some in tears, per sources.

Absolutely sucks for these kids. https://t.co/zG4JWn6kz1

All of this comes together to remind us that the NCAA continues to be the worst organization in existence. There was an opportunity to push the NCAA Tournament back a few weeks, to ensure a secure “bubble” environment, but the governing body chose not to. Yes, it would have been really tough for the players who are stuck in a broken system of amateurism, but if you asked VCU’s players whether they would rather have gone that route and be able to play with a limited roster instead of not playing at all, I would bet that the answer would be yes.