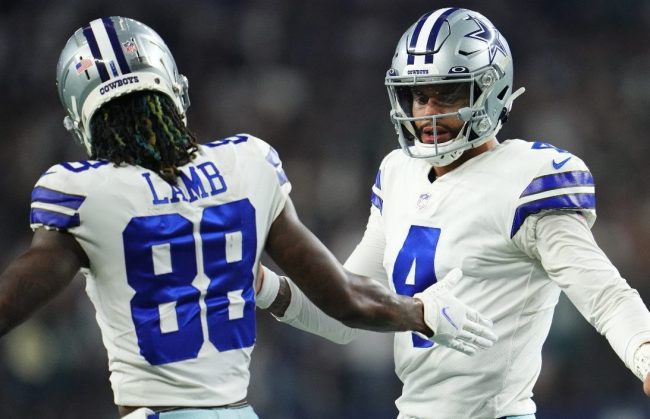 The Dallas Cowboys have generated a ton of hype for the upcoming football year after having a decent offseason. Their roster is much more well-balanced which should keep them in the playoff hunt down the line. However, fans can’t help but react to a bonkers commercial for DirecTV, after Dak Prescott and CeeDee Lamb get destroyed by the Real Housewives stars.

Jon Machota shares the new commercial by DirecTV. It’s actually a hilarious clip as some of the Real Housewives stars traumatize Prescott and Lamb. They each take massive hits and Dak Prescott ends up getting dragged off the field by two of the women. Meanwhile, CeeDee Lamb gets hit through a table on the sidelines. Check out the clip yourself and watch the Cowboys’ stars get destroyed!

Although it’s a hilarious ad, Cowboys fans can’t help but react to the clip. Some agree it’s hilarious, some aren’t fans of it. Either way, DirecTV has gotten a wide range of reactions. That means the advertising department did their job well.

I can no longer be a fan of the Dallas Cowboys.

Refs miss PI that costs the Cowboys. Most realistic commercial of all time.

She’s already better than half our defense

There is a wide variety of reactions to this commercial. Especially considering some Cowboys fans aren’t taking the joke too well. At the end of the day, this was a pretty solid ad, as it’s generated a ton of buzz on social media. Hopefully, Dak Prescott and CeeDee Lamb play a lot better in real life than they are depicted in this commercial.