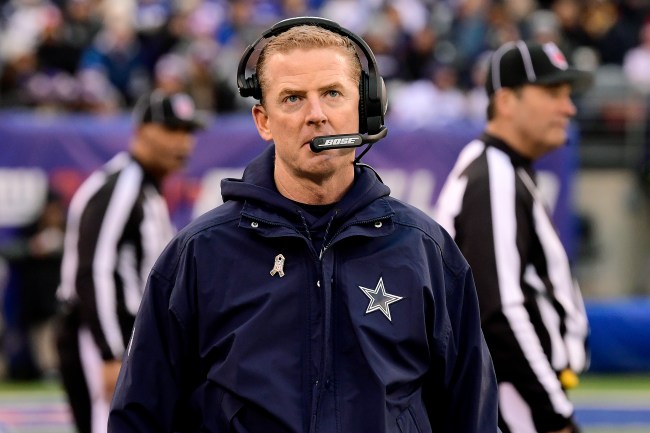 The Dallas Cowboys have currently lost three games in a row and fans are fed up.

After this week’s loss to the previously winless Jets, Cowboys fans have are calling for the team to fire head coach Jason Garrett.

Jason Garrett deserves to be fired for how he handled that clock situation right there. Just awful.

Gonna be a tough week in @dallascowboys!!! 🤔 Hmmm Y’all still think Jason Garrett is the answer? So predictable!! Go to @JasonWitten on 3rd down! 🤷🏾‍♂️🤷🏾‍♂️🤷🏾‍♂️ Call me a hater all u want! Just keeping in 100!

Today is Jerry’s Birthday. Jerry please give us all a birthday present and Fire Jason Garrett. Thanks.

Things have gotten so bad that one fan has taken it upon himself to start a GoFundMe to pay off Jason Garrett’s contract worth over $3 million just to have him fired.

A GoFundMe account created after the Cowboys' loss to the Jets on Sunday is raising money to fire head coach Jason Garrett.

Cowboys fans start GoFundMe to buyout remainder of Jason Garrett’s contract to get him fired 😂 pic.twitter.com/RpzffDaMBJ

“This campaign is on behalf of all the Dallas Cowboys fans who are fed up with Jason Garrett and it’s time we just let him go. We are raising money because we do not want to wait until the end of the season and he should be fired immediately and the money raised will go to the remaining money due to be paid to Garrett. We have some hope to get a coach to fire this team up and salvage us into the playoffs. There is too much talent on this organization to be a 3-3 team and enough is enough.”

While Jerry Jones has said that he’s not considering firing Garrett just yet if the Cowboys lose to the Eagles this weekend “the clapper” might just be done in Dallas.

Jerry Jones: “I’m disappointed. I didn’t think this would happen.”

He was not putting the loss solely on the coaches. He said it was problems across the board. When specifically asked about Jason Garrett’s future: “I’m not even coming close to those future type considerations.”

#Cowboys’ Jerry Jones won’t publicly review Jason Garrett’s performance each week, but don’t kid yourself: He’s at the final crossroads with Garrett. This is the third straight 3-3 start in Dallas. This entire staff is coaching for a job the next 10 games. https://t.co/rozKdyZw1t