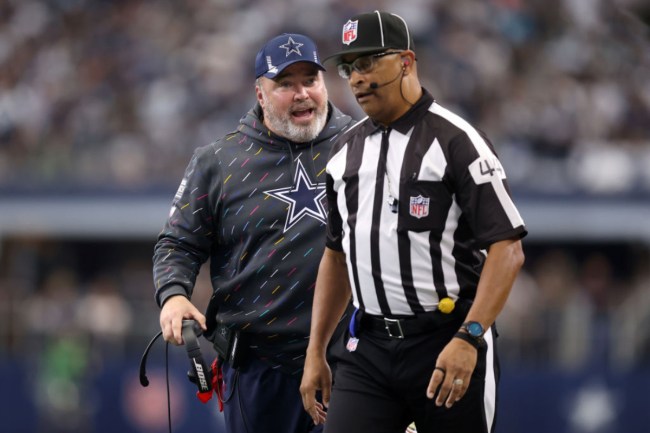 It’s going to take quite a while for Dallas Cowboys fans to forget the final seconds of their playoff loss to the San Francisco 49ers, and rightfully so.

Dallas fans aren’t concerned with the fact that their team committed 14 penalties in the game or that Dak Prescott had a wildly mediocre performance. The Cowboys had no business even being within striking distance late in the fourth quarter, but Cowboys fans don’t want to hear that, they’re too busy calling out the referees.

Down six points with 14 seconds on the clock and with zero timeouts left, Prescott took off on a QB run up the middle of the field. The Cowboys quickly lined up after his slide to spike the ball, but with the referee unable to get to the spot and set the ball the clock hit zeroes.

Now, Cowboys fans are even more infuriated having gotten their hands on highlights from the final seconds of the Week 3 matchup between the Green Bay Packers and 49ers,

With 16 seconds left and no timeouts, Aaron Rodgers and the Packers were able to clock the ball after a 25-yard gain in the middle of the field. Green Bay went on to win the game on a field goal, and Cowboys fans took notice of just how quick the official was getting to the ball to spot it so Rodgers could clock it.

The 49ers were certainly thinking about this from week 3 on that final play. GB got it clocked in :13 or so. pic.twitter.com/vqMEHZpPgN

Green Bay’s situation was a bit different, and there were 16 seconds left on the clock instead of 14, but Cowboys fans reacted as you would expect them to by collectively losing their minds.

This ref literally just touched it… the red during the game grabbed it moved it then moved it again lol https://t.co/gp8UUlUuVU

Gee, sure wish the ref on Sunday did this. Simple touch and gtfo. https://t.co/sAAjUGoUn0

“Dak should’ve handed the ref the ball” must be nice to get the Aaron Rodgers treatment https://t.co/t4oCS1VS2R

Not an excuse but come on, why was he that far out of the play for us. Wasting damn time. https://t.co/RvUFQFx9r8