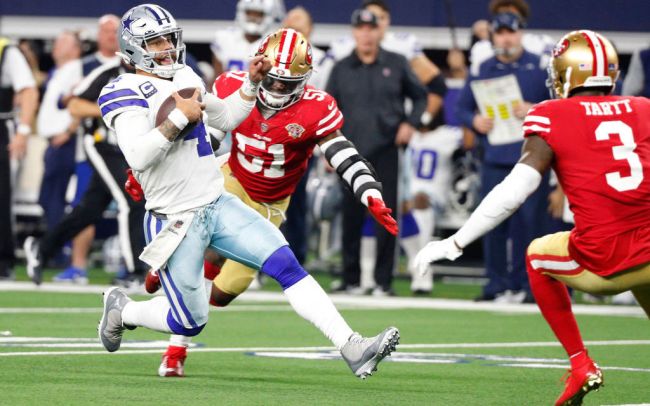 Following the Dallas Cowboys’ loss to the San Francisco 49ers on Sunday in the NFC Wild Card game, quarterback Dak Prescott expressed frustration with how the refs handled the end-of-game situation that saw the clock run out on Dallas as they were trying to spike the ball.

“We’ve practiced it,” Prescott said of the Cowboys’ final play of the game. “You hand it to the center. The umpire, all he has to do is usually come in and tap the ball. Don’t necessarily know exactly … why the hit (with the official) happened, I guess. Yeah, I know he’s going to come in and touch the ball. We could say, yeah he needs to be closer to the ball or whatever, but in hindsight, it’s just tough. Just tough to accept.”

Prescott’s comments are relatively similar to that of head coach Mike McCarthy, who told reporters after the game that they “shouldn’t of had any problem getting the ball spotted.”

“It’s just like anything — the execution between us and the official spotting the ball obviously wasn’t, you know… we shouldn’t of had any problem getting the ball spotted. Is that the quote you’re looking for?” McCarthy said.

“I’ve never seen that come down the way it came down as far as the collision between the umpire and the quarterback. We were trying to get inside the 30-yard-line to set up the last play.”

While the Cowboys are looking for anyone else to blame but themselves, the reality is that the biggest culprit in their loss to the 49ers is themselves, as they had 14 penalties in the game, which is tied for the second-most ever in a playoff game. This should come as no surprise, too, as the Cowboys have been the league’s most penalized team in both of McCarthy’s two seasons as head coach.

With the six-point victory over the Cowboys, the San Francisco 49ers have advanced to the Divisional Round of the playoffs and will take on reigning NFL MVP Aaron Rodgers and the #1 seed Green Bay Packers next weekend. The #2 seed Tampa Bay Buccaneers, who whooped the Philadelphia Eagles by a score of 31-15, will continue the defense of their Super Bowl title against the winner of Monday night’s Wild Card game between the Los Angeles Rams and Arizona Cardinals.

Over in the AFC, Joe Burrow and the Cincinnati Bengals will head to Tennessee to face off against the Titans, while the Kansas City Chiefs, coming off a beatdown of the Pittsburgh Steelers, will host the Buffalo Bills.