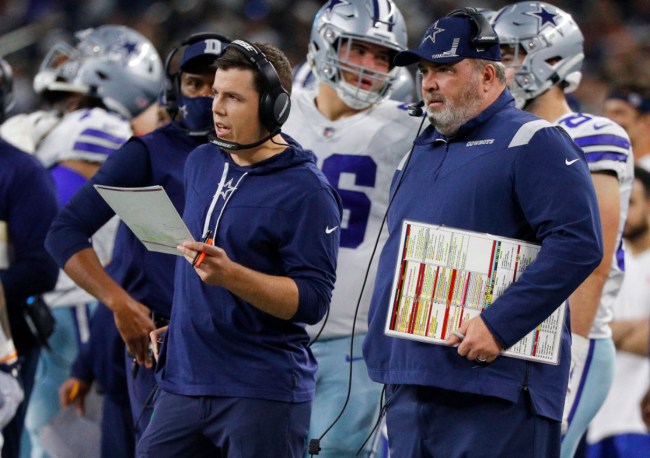 Depending on what your thoughts are about the Dallas Cowboys, their loss to the San Francisco 49ers was either incredibly fun to witness or an absolute horror show. For any neutral fans out there that simply love playoff football, the ending was simply unbelievable.

Trailing by six points with 14 seconds left and no timeouts left, Dak Prescott took off on a QB draw down the middle of the field. Time expired before he could spike the football to give the Cowboys one shot at the end zone sending Dallas fans into a real-life nightmare with the clock at zero’s.

Prescott wasn’t too pleased with how things ended either and voiced his frustrations with the officials during his postgame press conference. He wasn’t exactly angry with Dallas fans who decided to throw garbage at the refs as they left the field.

While Dallas fans are rightfully fuming about the way the game ended, we collectively need to take a step back and ask who made the play call for Prescott to take off and run? What was the thought process there?

According to Michael Silver of Sports Illustrated, offensive coordinator Kellen Moore made the bold play call, but head coach Mike McCarthy backed it up.

I'm told OC Kellen Moore called the QB run and Mike McCarthy was on the headset to OK it. Not either's finest hour. Dak should have checked off. I don't get any of it.

Even If The Final Play Call Worked, It Was Still Questionable At Best

If Prescott would have slid two seconds earlier than he did then he would have been able to get up and stop the clock with at least one-second remaining.

That’s all well and good, but the Cowboys were already on the San Francisco 41-yard line with the clock stopped with 14 seconds remaining. Dallas could have taken at least two shots to the end zone. Instead, the coaching staff told Prescott to go off on a run and the Cowboys’ streak of zero playoff wins has been extended to three years.