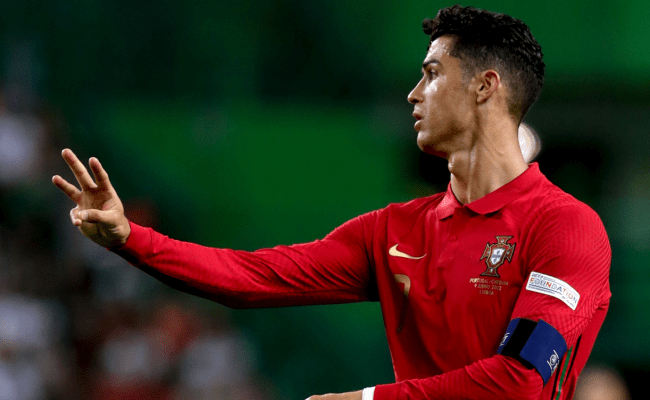 Cristiano Ronaldo is a very good soccer player. One of the best all time. But is he worth $277 million dollars for just two years or work? Someone out there thinks so. Someone with a whole lot of money to blow.

Ronaldo, 37, is currently signed to Manchester United with an option to extend the contract in June of next year.

Despite that, according to The Times, the five-time five Ballon d’Or winner has asked Manchester United to transfer him so he can play in the Champions League next season after Man U failed to qualify last year (or win a single trophy – the first time that’s happened to Ronaldo in more than a decade).

United reportedly told him they weren’t going to do that and that they expect him finish out his contract.

ESPN says Ronaldo, who made around $115 million last year according to Forbes, is set to turn down that offer.

That’s right. He is reportedly planning to turn down an offer that would pay him $2.6 million A WEEK. (And here we thought LIV Golfers were being offered absurd paychecks from Saudi Arabian oligarchs).

Of course, taking that deal would mean that Cristiano Ronaldo wouldn’t be able to compete in the Champions League, but wow, that is a lot of cheddar to turn down.

Needless to say, much like Charles Barkley, who said he would “kill a relative” to make $150 million, numerous sports fans on social media expressed that they would be more than happy to take the deal offered to Ronaldo.

Many also expressed how they feel about the Saudis throwing money around to pro athletes like it grows on trees (which, figuratively, it kind of does over there).

And yet probably 9 million a year die from starvation in the world. I'm a huge sports fan but who needs that kind of money? Where does it end?

I thought we were in a recession