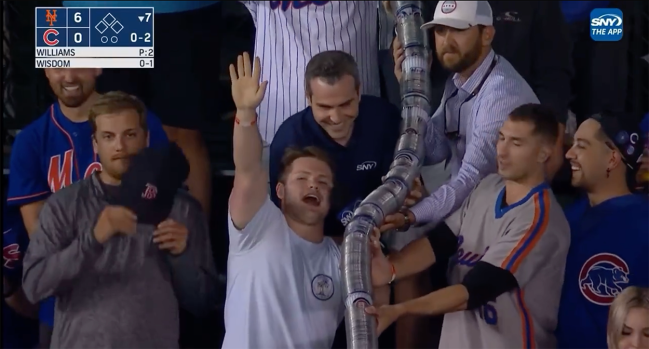 As is tradition, a Cup Snake appeared in the bleachers at Wrigley Field during the late innings of Thursday’s game between the Cubs and the Mets. Unfamiliar with such camaraderie amongst fanbases, the SNY television crew was fascinated by the phenomenon and wanted to get the scoop.

To do so, they sent sideline reporter Steve Gelb out amongst the people.

During a slow moment in play, the broadcast cut to the bleachers. There, Steve introduced a fan named Jake to what quickly became a national audience as the clip went viral.

Jake, who was standing between a Mets fan and a Red Sox fan, did not have a team-affiliated shirt. Perhaps he was there just to enjoy the Wrigley Field experience.

Whatever team he roots for doesn’t matter. Jake took his moment and ran with it, delivering one of an interview that will be referenced forever because of one specific line.

Holding a fairly large cup snake near the top of the chain, Jake began by shouting out his family by name like he’s a contestant on the Price Is Right. From there, he explained the art of the Cup Snake.

While breaking down how it works — even though it’s fairly self-explanatory — Jake turned to Steve and asked what inning it was.

“What is it, the eighth inning? The ninth inning?” Jake said.

In that moment, Jake delivered the line of the year.

“Basically the eighth, Steve,” Jake said before continuing his breakdown.

Jake in the bleachers gave all the play-by-play for @SteveGelbs 🤣 pic.twitter.com/nygzJZj3O4

Jake timing and tone was perfect. It is a quip that will live forever in the fan interview Hall of Fame.