The burden of proof. Producing evidence that makes your case. In this instance, Orioles outfielder Adam Jones is attempting to prove that a Red Sox fan shouted racist things at him. It’s tough to prove since there were only like thousands of witnesses but one would wonder “why the hell would Jones make it up?” In this instance, people tend to believe the player because, well, Boston is sometimes Boston. Truth or fabrication, the Boston faithful showed Jones they’re not all a bunch of fackin’ racists by giving the O’s player a standing ovation.

It would probably tough to find a person, especially a former major leaguer, who wouldn’t believe Jones and take the side of a nameless, faceless racist who….

…..of course, he did. If you’re a nameless, faceless racist, Curt Schilling is your Che Guevara.

Via the New York Daily News:

I don’t believe the story, given the world we live in. I don’t believe it, for this reason: Everybody is starving and hungry to sit in front of a camera and talk and be social justice warriors. And if a fan yelled loud enough in center field for Adam Jones to hear the N-word, I guarantee you we would’ve heard and seen fans around on CNN on MSNBC, they would’ve found multiple fans to talk about what a racist piece of junk Boston is.

“I spent most of my adult life in baseball parks. I heard the N-word out of my black teammates’ mouths about 100 million times,” Schilling continued. “For somebody to talk loud enough for Adam Jones to hear the N-word in center field, other people would have heard it.

“If somebody did say it, we’re going to see it and hear about it, and I would apologize to Adam Jones for doubting him, but until then, I think this is bulls—t. I think this is somebody creating a situation.”

But if a racist shouts the N-word in a crowd full of other racists, does he really make a sound?

Schilling continued his defense I don’t fucking know what by moving his argument to Twitter and stating that Jones can’t possibly be offended by the N word because it’s included in his at-bat music. 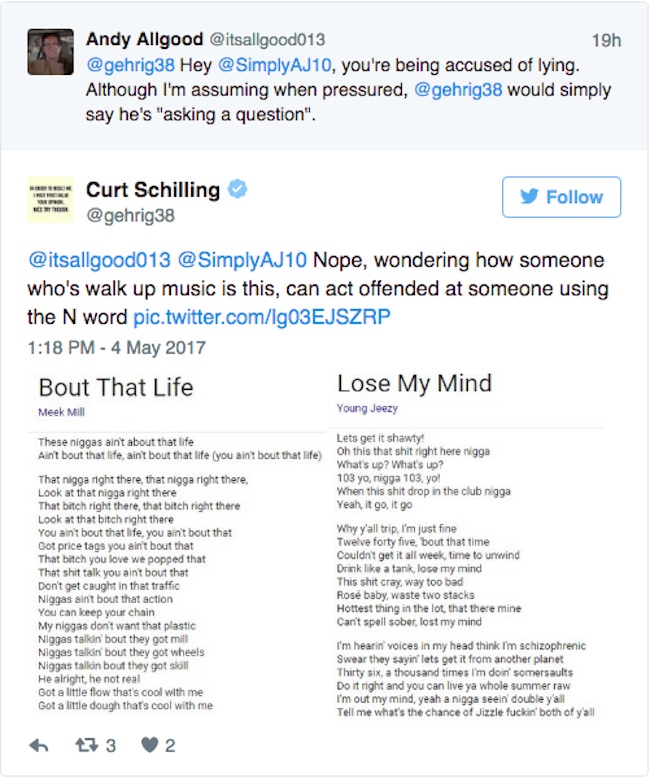 The most amazing part of this entire story is that people still listen to Curt Schilling speak.