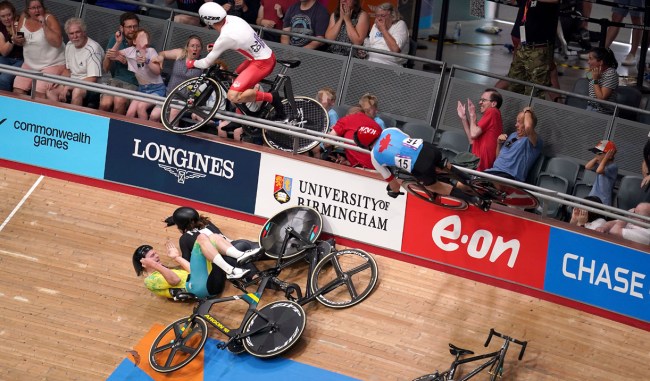 A wild crash during a cycling race at the Commonwealth Games in London resulted in one rider flying off the track and into the crowd.

While racing around a corner in the second qualifying heat of the men’s 15 km scratch qualifying, one of the cyclists lost control of his bike in a pack of other riders causing the crash.

In an attempt to avoid the carnage, England’s Matt Walls ended up flying over the wall separating the riders from the fans at the Lee Valley VeloPark.

Walls and fellow cyclist Matt Bostock were taken to hospital for their injuries. Cyclist Derek Gee was also transported to a medical facility (and joked about the crash later), while two spectators received treatment on site, but did not go to hospital.

Amazingly, no one suffered any major injuries due to the wild cycling crash

“Matt is alert and talking – as he has been throughout – and is being given medical attention in hospital,” British Cycling posted on Twitter, adding that all three riders suffered no major injuries.

“Following medical treatment in hospital, Matt Walls has been discharged with stitches in his forehead, but thankfully no major injuries,” they tweeted. “Our best wishes go to all riders and spectators involved in the crash and thanks go to the medical teams for their expert care.

Thank you everyone for the messages and support!

I’ve somehow come away with no serious injures just a few stitches and pretty banged up.

Big thanks to everyone who has messaged and checked in 🇮🇲🫶

Just want to let everyone know I’m okay. Quite battered but hoping to be back in time for the RR next week 🤞

The big crash came just a day after another British cyclist, Joe Truman, suffered a broken collarbone and a concussion as a result of a big wipeout at 45 mph on the final lap of a keirin semi-final that saw him slide across the track on his face while unconscious.

Thanks for all the well-wishes after yesterdays crash, was enjoying my little mid-race snooze! Will get this shoulder fixed and be back soon👀💪🏻 pic.twitter.com/Zj23JoMhvS

11-time world champion Chris Hoy said, according to the Daily Mail, Truman’s crash was “about as big as you can get in cycling.”

The next day, the crash involving a rider being launched into the spectators occurred.