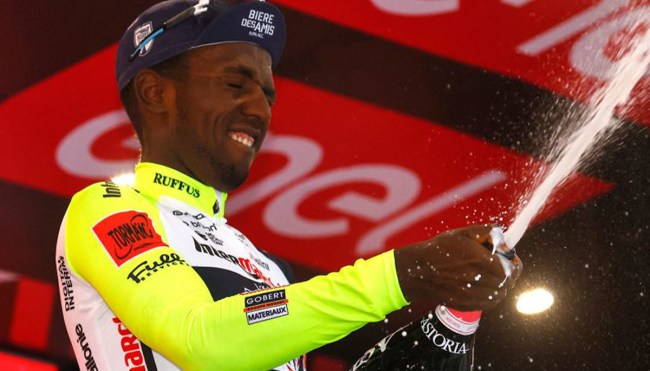 In 1967, driver Dan Gurney essentially invented a new sports tradition when he celebrated his win at Le Mans by shaking up the bottle of champagne awarded to the winner of the race and spraying it on the crowd that had assembled near the podium.

Wasting copious amounts of champagne has since become a staple of championship celebrations, and if you’ve ever seen players go crazy in the locker room after clinching a title, you’ve likely noticed many of them sporting the goggles that are usually handed out so the victors don’t have to deal with the alcohol stinging their eyes.

However, that minor annoyance pales in comparison to the fairly serious injury a pro cyclist succumbed to in an incident that occurred during a postrace celebration at the Giro d’Italia where no eye protection had been deployed.

According to CNN, Biniam Girmay—a pro hailing from Eritrea who is currently the top-ranked competitor on the UCI Africa Tour—secured a historic victory in the tenth stage of the Giro d’Italia on Tuesday after edging out the pack with the impressive sprint that made him the first Black cyclist from his home continent to win a leg at a Grand Tour event (the other two being the Vuelta a España and the Tour de France).

The occasion certainly called for a celebration, but things went awry when the man representing the Intermarché-Wanty-Gobert team was struck in his left eye after opening the giant prosecco bottle he’d been presented with.

After he was examined by the doctor, the 22-year-old was diagnosed with a hemorrhage in his anterior chamber and was forced to officially withdraw from the Giro d’Italia after being instructed to avoid physical activity.

Girmay was briefly hospitalized after the incident, and while he was temporarily unable to see out of the eye, he confirmed his vision had thankfully returned in a statement where he promised we won’t have to wait long to see him back on the bike.