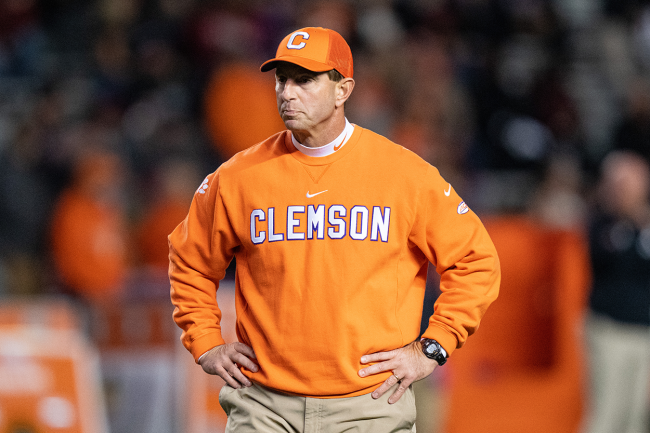 Dabo Swinney is the only man left standing at Clemson after what has been a chaotic college football coaching carousel. Three of the most important people in regard to his success have all packed up and left for new opportunities in the last seven days.

Three days after the Venables announcement, Miami poached another key member from Clemson when it announced that it hired athletic director Dan Radakovich to the same position in Coral Gables. It was a very big hire that made a clear commitment to revamping the Hurricanes’ leadership, which is the first step toward a return to glory.

Radokovich took over at Clemson in 2012. Since then, he has overseen a massive increase in the program’s budget and a significant renovation and expansion to the school’s athletic facilities. The Tigers played for four national titles in football and won two during that span.

And this morning, Virginia announced yet another loss to Swinney’s supporting cast. The Cavaliers, who had their head coach step down last week, are hiring Clemson offensive coordinator Tony Elliott to takeover.

We got our guy! Welcome to Charlottesville, Coach Tony Elliott!

A developer of NFL talent ✅

Elliott has been with the Tigers since 2011. He coached the running backs for four seasons before getting promoted to offensive coordinator for the last six years. The 42-year-old is considered not only a great teacher and coach, but an incredible recruiter.

In a matter of less than seven days, Swinney’s rug has been ripped out from under him. The man who has supported him and his vision at athletic director, the man who was considered the mastermind behind the Tigers’ defense, and the man who played a huge role in the success of the Tigers’ offense are all on to bigger and better things.

That just leaves Dabo, at “little ole Clemson,” all by himself.