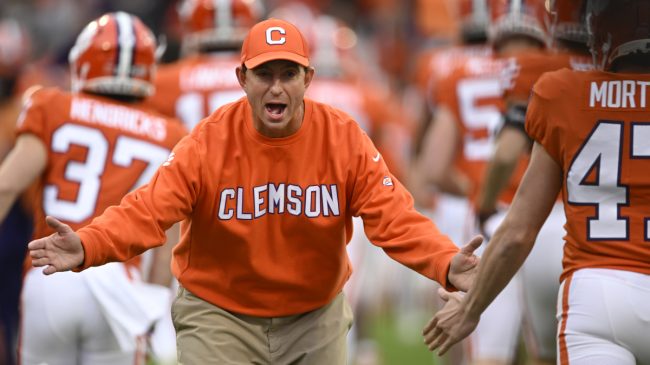 Dabo Swinney is no stranger when it comes to receiving hate from Big Ten fanbases. Most of that hatred comes from the Ohio State faithful, who constantly throw shots at the Clemson head coach.

Some of this stems from his comments made in the 2020 COVID year where he said the Buckeyes didn’t deserve a playoff spot after playing in an abbreviated season. It also comes from the fact that his Tigers have beaten the Buckeyes in three of four meetings.

On Tuesday, however, he expanded that Big Ten hatred footprint with some clueless comments made about a pair of league members ahead of rivalry weekend. It has fans questioning Swinney’s knowledge of US geography.

The Clemson head coach took a shot at Northwestern and Indiana while talking about his upcoming matchup against the South Carolina Gamecocks. While speaking with the media, Dabo was asked about the annual Palmetto Bowl to which Swinney responded the following.

The issue with his response? Northwestern and Indiana aren’t rivals. They’re not even in the same state, not that that always matters, but it seems to be relevant in this case. Otherwise, he’s just picking two random Big Ten teams and calling it a rivalry.

I know the intensity of the South Carolina-Clemson matchup firsthand, but Swinney’s comparison is way off. In fact, the teams he talks about aren’t even playing this coming rivalry Saturday.

Big Ten fans were eager to blast the head coach for the statement.

Because, as we all know, Northwestern is Indiana's biggest rival https://t.co/ZbKvjuzupn

The statement gave Big Ten fans a layup to take another shot at Dabo Swinney. He might want to brush up on his US geography before criticizing the intensity of another college football rivalry.