Dabo Swinney Doesn’t Seem To Be On Board With Conference Realignment, Sees A Mega Conference Forming In The Near Future 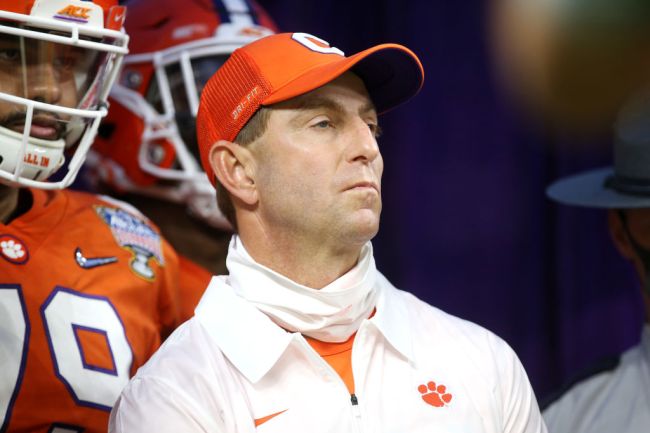 We all knew that the college football world was going to be turned upside down sooner rather than later, but not everyone was convinced we’d be seeing these types of changes so quickly.

College football was already top-heavy –  just look at the history of the College Football Playoff – and with athletes now allowed to get paid off of their name, image, and likeness the richer were going to get richer and the poorer were going to remain poor.

All of these moving pieces aren’t making Clemson head coach Dabo Swinney too happy. He was already against the idea of college athletes being paid and now he sees the writing on the wall that this is just the beginning of the end of conferences and NCAA-run college football.

Swinney spoke to the media at a charity event earlier this week about conference realignment. While he has to be careful what he says given that he represents Clemson and the ACC, he didn’t exactly say anything positive about conferences being re-arranged.

However, he did go ahead and say what everyone is already thinking, which is conferences are going to be dead soon and a mega-conference of up to 60 teams is what’s coming next.

Dabo Swinney on conference realignment: "Somewhere down the road … there probably will be some type of 60-team league that has it's own commissioner and playoff." pic.twitter.com/5VNYoYKgpd

ESPN’s Mark Schlabach shared what he thinks the SEC is moving toward with all of this conference realignment.

Industry sources have indicated to ESPN that this might be only the first step in the SEC’s grand plan to create a true superconference, which a source said might include as many as 60 teams or as few as 32. If it’s a bigger number of schools, then the sport’s upper echelon would include four superconferences, and the ACC, Big Ten, Pac-12 and SEC would remain as stand-alone entities.

Every college football fan that’s been paying any attention at all has seen all of these changes coming. Swinney knows what’s on the horizon as well, and as Jay Bilas recently pointed out, if the ACC was smart it would be trying to merge with the SEC as fast as possible.