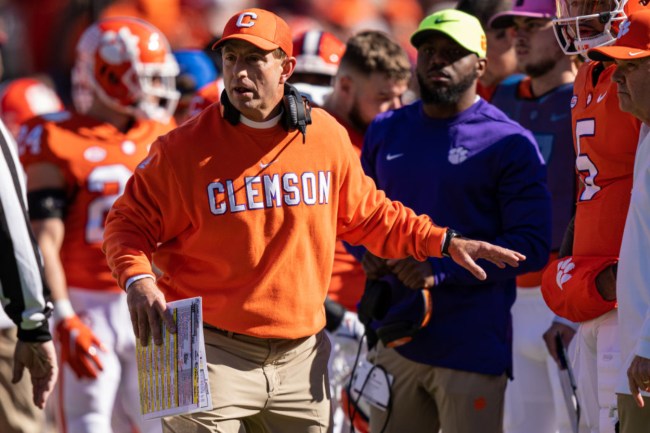 Dabo Swinney is going with the relaxed look ahead of Clemson’s bowl matchup with Iowa State.

The Clemson head coach showed up to the media session ahead of Wednesday’s Cheez-It Bowl in Orlando in an orange tracksuit. The 52-year-old went with the orange top and orange pants, all he was missing was an orange hat and some orange tennis shoes to really pull the outfit together.

Getting ready for the prom pic.twitter.com/TNGcLEf0xu

Swinney can’t help the fact that Clemson’s primary color is bright orange, but nobody forced him to wear the orange-on-orange get up. He probably should have elected to go with some grey or black track pants with the orange top, but his outfit choice is just Dabo being Dabo.

The orange tracksuit is no less than 100x brighter than the actual bowl of Cheez-Its in the middle of the photo, it’s truly remarkable.

Social media of course loved Swinney’s all-orange tracksuit. Here’s a look at some of the best reactions to Swinney’s outfit:

dabo lookin like he's about to pick up trash on the side of the road. https://t.co/ebpxfDmIHR

Dabo has taken his support for unpaid labor a little too far. https://t.co/gz3RA4nF5m

I'm the only one who thinks this looks like a shot of astronauts on a press tour two days before they go to outer space? https://t.co/vLjtdkAsej

Clemson and Iowa State are set to do battle at 5:45 PM EST on Wednesday evening. Swinney should show up on the sideline in the all-orange tracksuit, but I doubt he will.