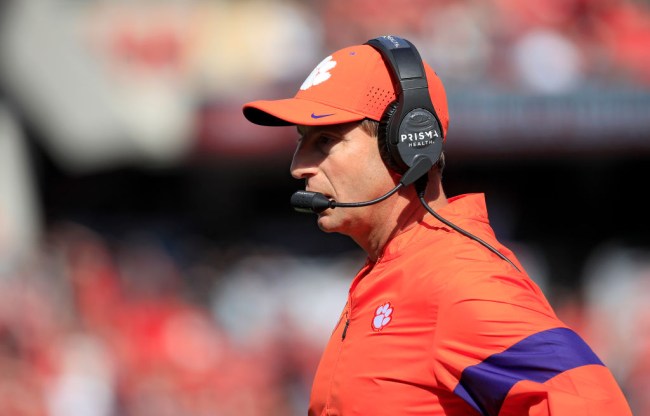 Clemson went to Louisville Saturday and took care of business in a major way dominating the Cardinals 45-10 to keep its undefeated season alive. Things were good in Tiger land on Saturday.

Well, good for everyone except for one player on the team.

Freshman Andrew Booth threw a punch in the third quarter and was ejected from the game. With that sort of thing, some sort of disciplinary action is usually taken the following day, but Dabo Swinney acted much quicker than that.

Clemson v Louisville the old Punch to the Helmet 🏈🏈 pic.twitter.com/Yb0lHFTqs8

Punching a guy when his helmet is still on is still the most confusing thing in all of sports, it makes absolutely zero sense.

According to ESPN, Swinney made Booth ride back to Clemson on the manager bus instead of flying home with the team.

That actually is a pretty brutal punishment seeing as how the drive from Louisville to Clemson takes about seven hours when a flight is about an hour and a half.

If I’m being completely honest, I’d almost rather be suspended for the team’s next game than have to sit on a bus for seven hours. Swinney did say the ‘rest will be handled in-house’ in regards to any sort of punishment on top of taking the bus home.

“He is disappointed in himself, embarrassed. He has apologized to our team and our AD. He’s been extremely remorseful. What happened is way out of character for who he is. Very pleased with how he has taken ownership. He had a long bus ride home last night and plenty of time to think about it.”

Booth probably walked away with a banged-up hand after punching a guy’s helmet, got ejected and then had to ride home on a bus with some team managers. What a Saturday for that guy.