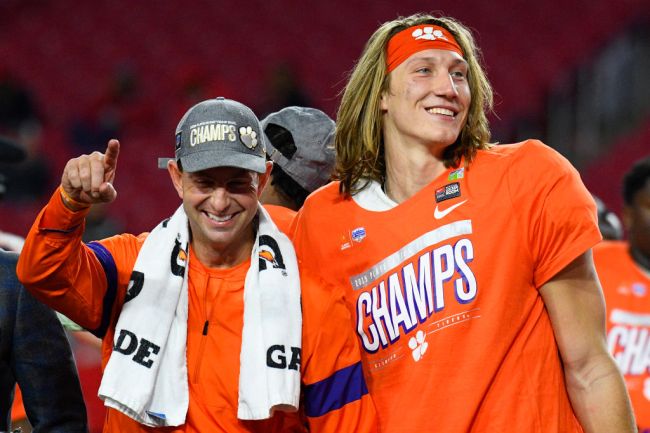 Trevor Lawrence hasn’t needed any sort of promotion from outside sources when it comes to convincing NFL scouts that he’s got what it takes to be a franchise quarterback for years to come. Lawrence has had ‘future first-overall pick in the 2021 NFL Draft’ attached to his name since his high school days, but that hasn’t stopped Clemson head coach Dabo Swinney from gassing him up in the media every chance he can get.

Swinney is good at promoting his former players as they prepare to take that next step into the NFL and for Lawrence, the Tigers head coach has attached him to Steph Curry. He compared Curry and Lawrence back in February but doubled down on the comparison in a recent appearance on the Move The Sticks podcast going more in-depth this time around.

One statement really stands out here, and that is that “Lawrence can be an international superstar.” When you think international sports superstars you don’t really think about guys in the NFL. Most immediately think of the Cristiano Ronaldo’s, the Lionel Messi’s, and the LeBron James’ of the world, but maybe Lawrence really can fit into that mold years down the line. Maybe he can fill the international superstar shoes of Tom Brady when the GOAT eventually decides to call it quits, but that’s a ginormous maybe.

Lawrence will be the first player to have his name called on April 29 at the 2021 NFL Draft officially becoming ‘the guy’ in Jacksonville.