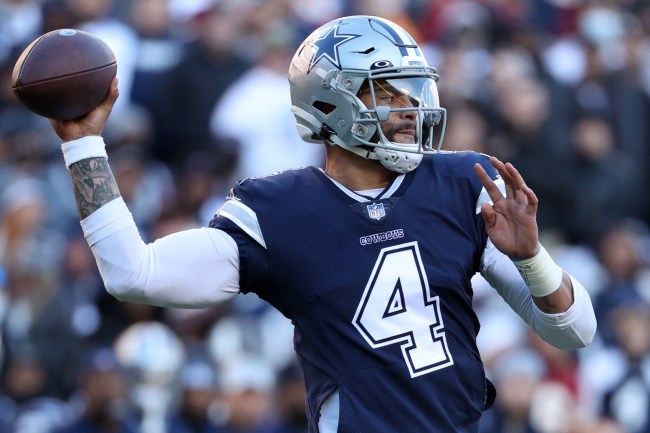 Dak Prescott’s play has been a popular topic of conversation in the NFL lately. The Dallas Cowboys quarterback has seen a dip in his play since returning from a calf injury and many have taken notice.

Cowboys owner Jerry Jones has been asked about it multiple times in recent weeks. At first, he laid the blame on the Cowboys’ wide receivers, but he has since changed his tone.

Dak struggled against the Washington Football Team over the weekend, putting up just 211 yards and a touchdown while throwing 2 picks. After that performance, Jones was ready to admit that would at least be fair to say Dak was in a slump.

Prescott was finally asked about it himself today and he disagreed.

While some may disagree about whether or not Dak Prescott is in a slump, I think we can all agree that he’s right about the Cowboys needing to get back to playing the way they did earlier in the season.

The Cowboys were firing on all cylinders before Dak’s injury. They had scored 35 or more points in 4 consecutive games before he missed week 8’s matchup with the Vikings.

If they can get back to playing at that level, then they’ll be a dangerous contender in the NFC, especially with their improvements on the defensive end this season.

If they can’t get it figured out over the next few weeks, then they’ll be the most vulnerable division winner in the NFC.

It’s a great time for the Cowboys to get a matchup with the struggling New York Giants. They’ll offer Dak Prescott plenty of opportunities to bust his slump.