This Story About How Dale Earnhardt Jr. Once Got Jeff Gordon Out Of A Speeding Ticket Is A+ 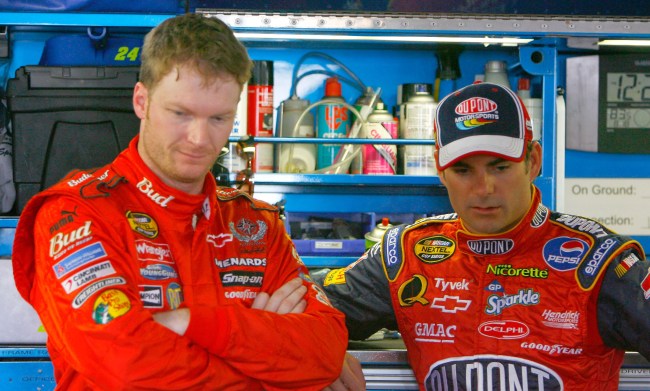 Any auto racing series like NASCAR is like a traveling carnival for drivers and their crews. This I know first-hand as I used to actually own a racing series back when I had way more energy (i.e. was a lot younger).

The things that happen away from the track are far more entertaining than anything that occurs on race day. As a result, I’m guessing that my auto racing travels back in the day probably cost me several years on end of my life, but it sure was fun.

One good example of the shenanigans that take place when drivers and their crews are not racing was relayed by NASCAR legend Jeff Gordon during his appearance on Tuesday’s episode of the Dale Jr. Download podcast.

The story takes place around 2007 when Dale Earnhardt Jr. was about to become Gordon’s teammate at Hendrick Motorsports.

“I was driving to dinner and I said, I’mma call him. And I didn’t have the hands-free set up in the car, so I just call him. So I’m driving along, on the phone, we’re talking, I’m congratulating you and welcoming you to the team, and it’s cool. You picked up, and we’re having a nice conversation. And all of a sudden, I’ve got blue lights in my rear window, and I’m like, ‘Uh oh, I’m getting pulled over.’

“So, I wasn’t sure if I should stay on the phone with Dale or not, but I said, ‘No no, stay on here. I may need you.’ And luckily I did because first, the guy says to me, ‘You know you’re not supposed to be on a cellphone.’ And then second, he’s like, ‘And you were speeding.’ And I just said — and I never do this, but I said this is the moment I’ve got to pull this off.

“I said, ‘I know, I’m sorry. You don’t happen to be a Dale Earnhardt Jr. fan, are you?’ And he’s like, ‘Well yeah, why? What does that have to do with anything?’ And I said, ‘Well I’ve got him on the phone. I was congratulating him on something.’ And he goes, ‘What?’ And I just handed the phone off and you spoke to him for two seconds and got me out of it!”

Earnhardt then explained, “I was just trying to make a great impression on my new teammate. … This guy’s the senior authority over there, and so that worked out great for me.”

Mission accomplished as Gordon agreed that Junior had made “the greatest impression” by getting him out of what would have been a pricey ticket.