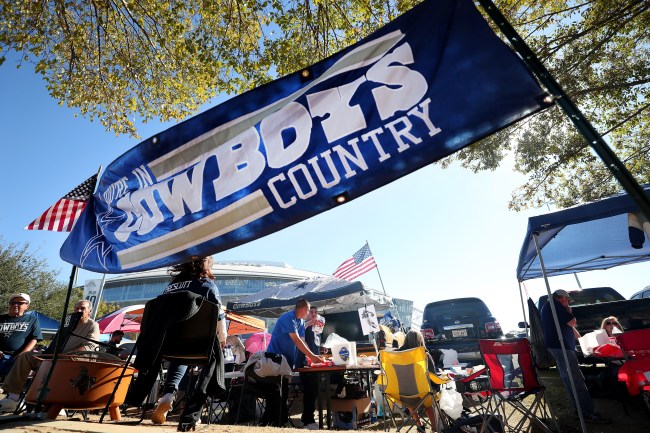 The Dallas Cowboys beat the Seattle Seahawks in a tough fought NFC Wild Card Game on Saturday night, 24-22, but when the game ended and the players were done battling it out on the gridiron, it seems like some of the fans decided to keep the fight going — literally. That’s because video surfaced on TMZ Sports, via Total Pro Sports, that showed one Seahawks fan getting thrown to the ground by a Cowboys fan by his hair, and then getting his ass handed to him by other Dallas fans while still in the stadium.

As the video below shows, the Dallas Cowboys fan plays dirty with the long-haired Seahawks supporter, not just going with a few punches, but deciding to toss the guy down to the ground by his hair. It’s actually one of the more wild NFL fan brawls I’ve seen in a long time, and, unfortunately for the Seattle fan, it didn’t end until other Cowboys fans got a few cracks at him, too. Take a look at the video below.

As a grown ass man, I’ve (knock on wood) never been in a fight over a sports team, which is one of my proudest moments. Look, I’m not here to play 34-year-old man and preach to all those people who have ever fought someone over an opposing team, but, for f*ck’s sake, is it really worth trying to knock someone out because they’ve got a different team’s jersey on than you do? I’d rather just celebrate with a bunch of buddies over some beers, but, hey, that’s just me.

Hopefully this Seattle Seahawks fan isn’t hurting too much this morning. It’s bad enough that his team lost to the Dallas Cowboys in a close game, but it had to suck more knowing that he literally got his ass kicked afterwards, too, whether he was asking for it or not. On the bright side, at least the sheer entertainment of the brawl is solid.