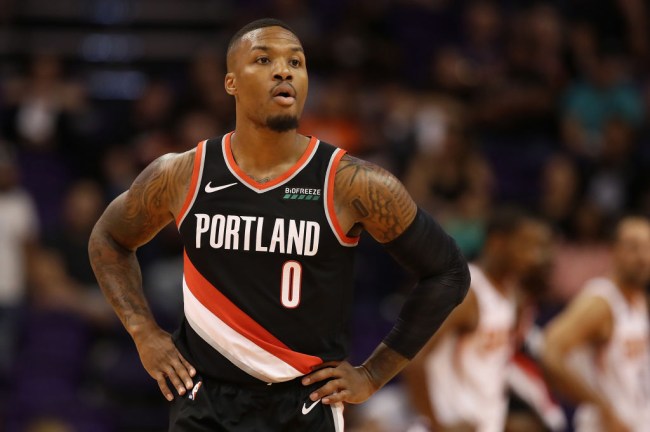 For those of us on the east coast who don’t regularly stay up until 1 am to watch the west NBA matchups, we may not be entirely privy to just how good Damian Lillard is. Through the first five games of the season, Dame is averaging a shade under 32 points per contest on 47 percent shooting while leading his Blazers to a 3-1 start.

The three-time NBA All-Star had one of the best games of any player this season when he dropped 41 points in a 128-114 win over the Orlando Magic on the road, marking the 17th time Lillard scored 40 or more in a game. Thirty four of those points came in the second half, which is a franchise record for second half points for a Blazers player. Reminder: Clyde Drexler played on the Blazers for over a decade. What’s equally as impressive, is that the 28-year-old scored all those second-half points on 11-15 shooting, including going 5 for 8 from 3-point range.

After the game, Dame was asked what possessed him to go full NBA Jam mode. His response: a Magic fan heckler behind the bench.

Lillard responds to heckling fan by going off in the second half.
"He just kept running his mouth. I told him you're gonna get them in trouble… I addressed it how I should. I did it on the court. #RipCity #PokeTheBear pic.twitter.com/oUF1F0wgAb

“They had a guy behind their bench that just kept running his mouth and running his mouth,” said Lillard. “And I told him, I said, ‘you’re gonna get them in trouble.’ You know what I’m saying? I’m here for this. He kept on talking, and in the second half I didn’t hear a word from him.”

The heckler won’t have a chance to try to rattle Lillard again this season, seeing as the next time the Blazers play the Magic, it’s in late November in Portland. I’m sure he’s still trying to swallow this highlight reel…