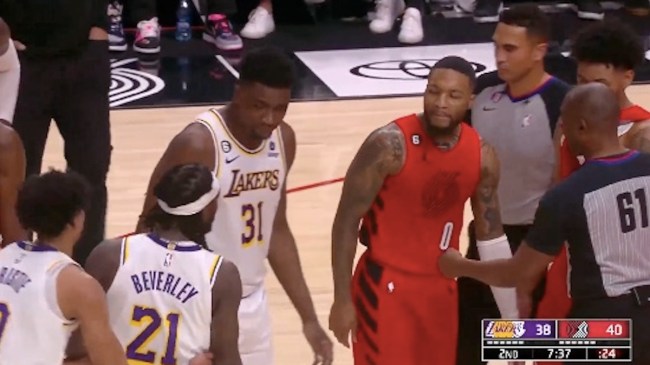 Following their altercation during Sunday night’s game between the Los Angeles Lakers and Portland Trailblazers, Blazers star Damian Lillard took to Twitter to fire shots at Pat Beverley by calling him a con man.

Lillard’s comments came after the pair were talking trash to each other during the Lakers’ 121-112 victory over the Portland Trailblazers on Sunday night.

In his Monday afternoon tweet, the 32-year-old six-time NBA All-Star called Beverley a “con man” while also comparing him to the character Flip (who was played by the late, great Bernie Mac) from the 1994 crime/drama film Above The Rim. The Flip character was, according to the movie’s Wikipedia, “a homeless crackhead who played basketball in high school.”

Con man. Flip from above the rim https://t.co/EpKvfyY3VG

Beverley, of course, didn’t take long to clap back at Lillard:

Lillard calling Beverley a con man harkens back to Russell Westbrook’s infamous comments about the notoriously pesky point guard a few years back:

“Pat Bev trick y’all, man, like he playing defense,” Westbrook said back in 2019 following a game in which his Houston Rockets teammate James Harden scored 47 points.

“He don’t guard nobody, man. He just running around, doing nothing.”

In the losing effort, Lillard had 24 points, 10 assists, and six rebounds. As for Beverley, he had just four points, two assists, and two rebounds in 29 minutes of action. The Lakers were led to victory by LeBron James’ 37 points, 11 rebounds, and four assists.

RELATED: Lakers Guard Patrick Beverley Clearly Takes Too Much Pleasure In Ruining Christmas For His Kids