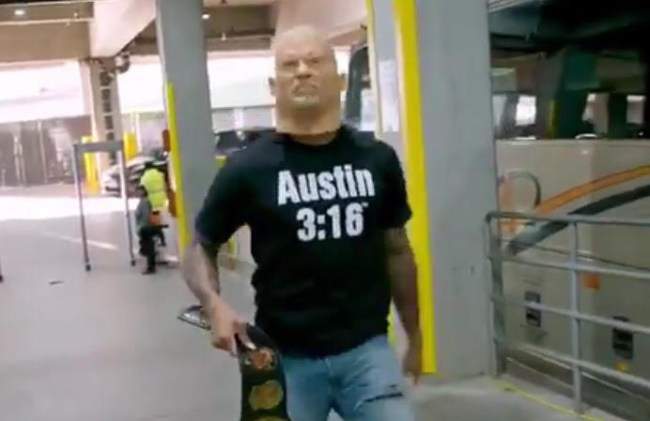 Damian Lillard was in the Halloween spirit today while entering the arena before the Portland Trail Blazers home game against the Washington Wizards. Thing is, given the fact he was disguised in full Stone Cold Steve Austin garb, I’ve got a feeling he was asking for beers rather than some candy in his bag.

Dame went full Texas Rattlesnake, wearing a mask and carrying a championship belt, so the Wizards best be scared that the All-Star point guard doesn’t start going Stone Cold Stunner on them tonight. Take a look at Lillard’s pregame outfit.

And that’s the bottom line, because @Dame_Lillard said so. pic.twitter.com/JvIMyoVkJQ

Of course, after Damian Lillard’s video hit the Internet — and found its way to the man himself, Stone Cold Steve Austin, the wrestling legend responded with full support. Here’s what Austin had to say in response.

This is the second time in as many days that we’ve seen an athlete disguise himself, with former NFL punter — and king bro — Pat McAfee dressing up as a 70-year-old guy and booting a bunch of field goals at the Indianapolis Colts-Buffalo Bills game for cancer research. While Lillard’s wasn’t for anything like that, it’s still pretty F’in cool, ’cause nobody beats Steve Austin. Yeah, that’s the bottom line, ’cause Stone Cold said so!