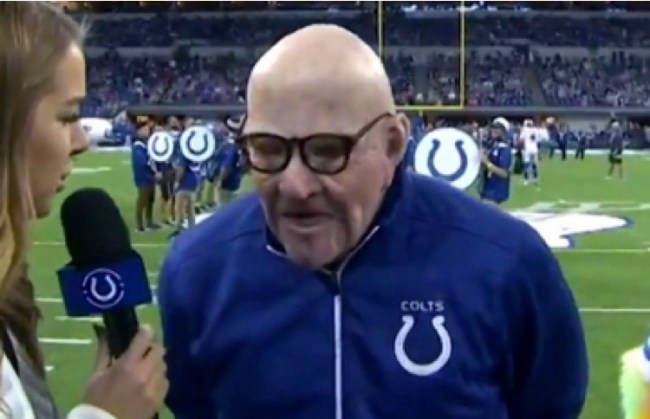 F*ck cancer! I’ve said it before, and, until we find a cure for the terrible disease, I’ll continue to say it. With every single person in the world, presumably, impacted by cancer on some level — whether battling it themselves, or seeing a friend or family member try to defeat it — we know we’ve got lots of research left to do to try and knock it out.

Well, with breast cancer awareness month going on as we speak, one former NFL player — the always hilarious Pat McAfee — decided to do something unique during the Indianapolis Colts-Buffalo Bills game today. And, when I say hilarious, I mean it involved the Aussie to disguise himself as a 70-year-old man to kick three field goals for cancer research.

Here’s a look at the video.

Colts gave this elderly fan a chance at $70K for charity if he hit three field goals.

Watch until the end… (via @Colts)pic.twitter.com/PaXl5otmej

Rushing from three different yard lines, Pat McAfee helped boot away cancer in a way that only he can do. Pretty awesome stuff, so here’s to hoping more people donate to the cause this month, and every month, to help kick cancer’s ass.

As you might imagine, the Internet loved McAfee’s little stunt, tossing out respect to the dude for showing off his kicking skills for cancer research.

@PatMcAfeeShow such a legend https://t.co/pucNqWLMPP

This is so great. Love @PatMcAfeeShow 🙌🏻 https://t.co/KMLH7J8hlX

I fucking love you…. 😂😂😂@PatMcAfeeShow https://t.co/zQQf8TvNjn

“Old man” just made three field goals to give $70,000 for cancer research. @PatMcAfeeShow … this guy gives you a run for your money 😉 pic.twitter.com/vb8Ic5cSoh

@PatMcAfeeShow IS THE MAN!!

Sure, Pat McAfee might not be in the league anymore, but he’s still the coolest bro out there. Good work, dude.