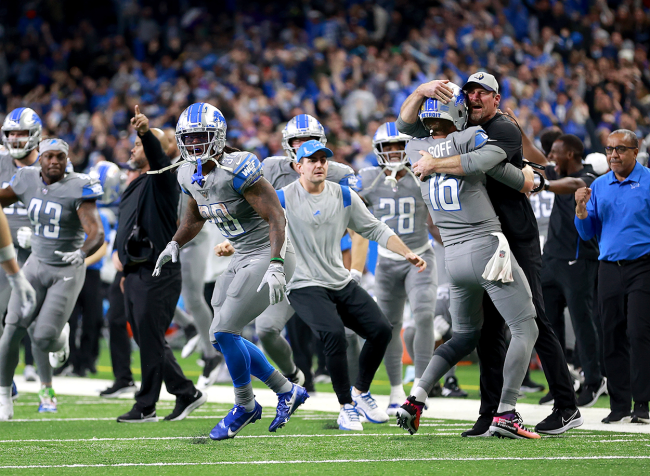 Detroit will not be going winless in 2021. The previously 0-10-1 Lions beat Minnesota in walk-off fashion on Sunday and it was epic.

After taking a 20-6 advantage at halftime, the Motor City team allowed the Vikings to climb back into the game and take the lead in the second half. All signs pointed toward the Lions blowing the game.

With four seconds remaining in the game, Detroit was down by four and things didn’t look promising. Until the nearly unthinkable happened.

Facing 4th-and-2 from the 12-yard-line, Jared Goff dropped back in the pocket, looked to his left and found Amon-Ra St. Brown open in the end zone. A quick flick of his wrist, Goff connected with his rookie receiver for the first touchdown catch of St. Brown’s young career.

Love to see it 🙌@JaredGoff16 to @amonra_stbrown for the game-winner!

The clock expired on the play and Detroit won the game by two.

On the sidelines, first-year head coach Dan Campbell’s reaction said it all.

Campbell is a high-spirited coach who wears his heart on his sleeve and expects nothing but full effort and passion from his players. He trusts what he is building and believes in his organization and all 53 guys on his roster.

As Goff connected with St. Brown, Campbell went wild. His headset went flying and he ran over to give his quarterback a bear hug.

After the game, a very emotional Campbell spoke about what the win meant to not just him, but his team.

Coach Campbell on what the win means to this team. pic.twitter.com/e7XRUk5QNi

He was so proud.

"We found a way to win." pic.twitter.com/SzjZGUsYfT

Campbell went on to dedicate the game ball and the Lions’ first win of the year to the victims of the Oxford school shooting. It was a remarkable moment after a remarkable win.