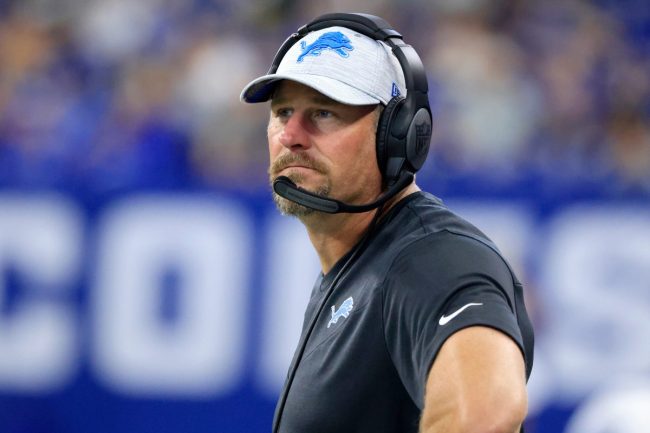 Lions head coach Dan Campbell is known for making some interesting references when talking football. Fans are seeing that firsthand with the latest season of “Hard Knocks.”

Look no further than his comment saying he’ll beat your a** even if you have “one a** cheek and three toes.”

No one is exactly sure where he comes up with these sayings, or even if they have any meaning, but they can make you want to run through a wall. Lions players and fans seem to love Campbell, who’s entering his second season in Detroit.

While the squad went just 3-13-1 last season, they did show both heart and improvement. And the team appears to be working hard to continue that growth in 2022. But sometimes, you have to take a step back from the grind and take a moment to loosen up.

That’s exactly what Dan Campbell did this offseason when he invited comedian Josh Adams to roast him in front of his team. Adams did his best to dog the head coach by talking about his off-the-wall quotes, his massive size, and anything else he deemed worthy.

.@Lions staff had to roast Dan Campbell on the mic 💀 @brgridiron

“I didn’t know Coach was that big, damn. We need you on special teams, f— all the coaching. We need you out there breaking up the wedge, fam. He walked up to me big as s— talking about ‘how you doing?’ I’m like what the f—, when did Hulk Hogan start coaching.”

On his off-the-wall commentary:

“He just be saying s—. You know, he looks passionate, but I know you f—ing looking at him like, ‘One a– cheek and three toes??’ Who the f— is he talking about? I’m not going to hit anybody. You’ve got to have at least two a– cheeks for me to beat your a–.”

Campbell was a good sport about the roast and the Lions players loved the set. They’ll get back to the grind soon, though, with the team just a few weeks away from the season opener.