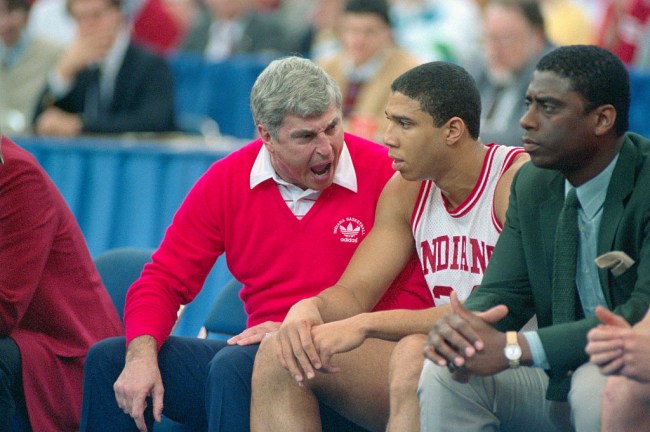 Bob Knight always struck me as a salty old man. I have to imagine that is most people’s opinion of the man. Hell, when I dropped this video in our chatroom, someone immediately saw the headline and responded, “Because he was a flaming prick of a human being?”

While that may be true — let’s be honest he seems like a giant dick on fire — it turns out his famous chair throw from 1985 (seen directly below) might not have been a chair at all if he wore a sport coat that day.

On The Dan Patrick Show, former Indiana guard Dan Dakich unveiled the real reason why Bobby Knight tossed a chair onto the court like a goddamn lunatic (or like a flaming prick of a human being if you want to describe it in the most accurate of terms).

Here is what Dakich said:

“They just pulled me down to come into the game, and London Bradley made a couple bad calls. So my man went to his sport coat. It was the first time he never wore a sport coat. And Uwe Blab, we’re running out there, he goes, ‘Hey Danny … Coach is gonna get thrown out today.’ I go, ‘What you talking about?’ ‘He’s not wearing a sport coat.’ So, he reached for his sport coat — you really can’t see it on the film — he didn’t have it to throw, so he threw a chair. Dan, I swear to God, Randy Wittman and I one day counted: He threw 52 chairs against the wall in practice one day. So, when he threw the chair, none of us were surprised. It wasn’t a big deal, but apparently it became a big deal.”

Dan Patrick followed up with:

So you think if he had his sport coat there to throw he would have thrown that instead of the chair?

I don’t buy it. Not for a goddamn second.