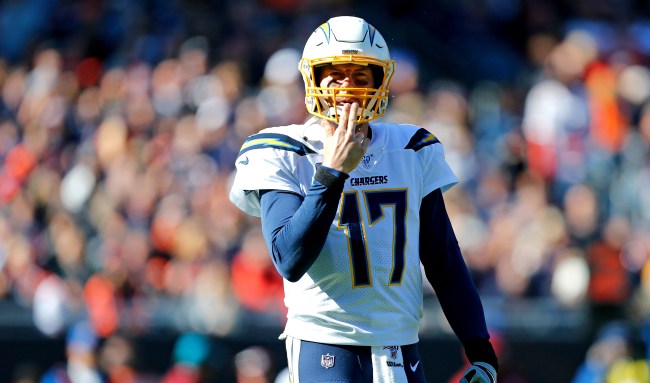 Philip Rivers’ time as a Charger looks to be coming to an end. Earlier this week, Fox Sports’ Jay Glazer reported that the franchise has ‘moved on’ from Rivers meaning that he will officially be a free-agent come March.

Rivers turned 38-years-old in December and the market for an aging quarterback isn’t necessarily the strongest one, but following the end of the season, he said retirement wasn’t an option.

Interestingly enough, after the regular season ended it was reported by CBS Sports’ Jason La Canfora that the Colts could target Rivers in free agency.

But if Andrew Luck stays retired, Rivers might be worth a look there. I expect the Colts to be movers and shakers on the trade and free agency front, as well, looking to add more sizzle to the roster, though the draft remains their lifeblood …”

Fast-forward to today and those reports and rumors continue to be strong ones.

During his show on Tuesday, Dan Patrick read a text message he received live on-air from his source that suggested Rivers is going to land in Indianapolis.

“I have an update on where I think Philip Rivers is going to end up. I just heard from a source who’s listening to the program. The answer is – the Indianapolis Colts. I got a text, ‘Hearing Philip Rivers to Indy.’ My response was ‘whoa’” Patrick said.

Patrick kept who his source was under wraps, but it’s safe to assume Patrick isn’t reading texts from some nobody NFL insider live on-air and putting that information out there to listeners.

Jacoby Brissett is signed until the end of the 2020 season so if Rivers does get picked up by the Colts there may be a friendly quarterback competition coming to Indianapolis.

I wouldn’t say Rivers is an upgrade over Brissett, not at all, but it would create quite the situation in Indy.

My initial reaction to this story was probably similar to a lot of you reading this: why the hell is any team trying to sign a 38-year-old quarterback?