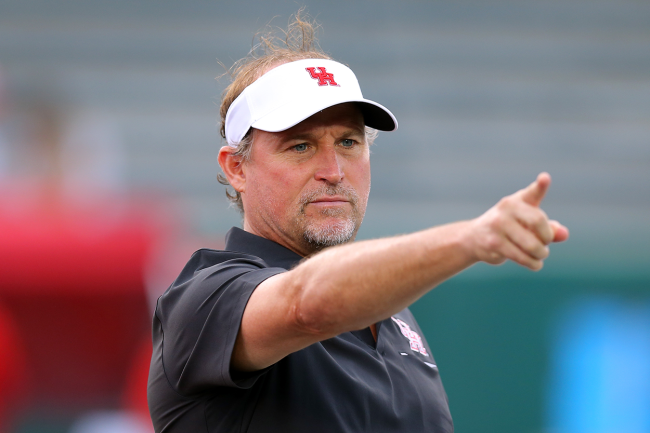 Dana Holgorsen has been a head football coach in the NCAA since 2011 and has been known to enjoy (more than) a few beers. In fact, when it comes to his hiring of assistant coaches, a “shit ton” of cold brewskis is said to have a lot to do with the process.

Holgorsen, who began his coaching career with Valdosta State in 1993, climbed his way up the ladder with stops at Texas Tech, Houston and Oklahoma State as an offensive coordinator before West Virginia brought him on as head coach in 2011. During his first season in Morgantown, the Mountaineers went 10-3, won the Big East, and blew out Clemson 70-33 in the Orange Bowl.

Over the course of that season, West Virginia hung a combined total of 458 points on its opponents. They scored a lot.

However, they had the second-worst defense in the conference. And against unranked Pittsburgh, it took a fourth-quarter touchdown to come out on top 21-20. The Panthers held the Mountaineers to the least amount of points that season by giving Holgorsen fits in the passing game.

A few years later, Holgorsen went to make changes on the defensive side of the ball during the offseason and looked at that pesky 2011 Pittsburgh team for help.

Tony Gibson was the Panthers’ secondary coach and passing game coordinator in 2011, but was at Arizona when Holgorsen decided that he wanted him on his staff. In a new profile on various hiring processes around the country from Bruce Feldman of The Athletic, it details how Holgorsen made his hire.

For whatever reason, according to Feldman, the Mountaineers’ head coach was in Houston at the time of the interview. He flew Gibson down to H-Town on New Year’s Eve and picked him up in a stretch limo.

From there, they drove to Demeris Bar-B-Q, which is one of Holgorsen’s favorites. But it was New Year’s Eve, so the restaurant was closed.

It didn’t matter. The owner of the restaurant met Holgorsen and Gibson there.

And then it was just another night on the town. There was no football involved in the interview.

“We played ‘Golden Tee’ for about six hours and drank a shit ton of beers,” said Gibson to The Athletic. “We never talked one down of football. I got back home and my wife said, ‘How’d that go?’ I said, ‘I have no idea, I got drunk with him.’”

Ultimately, Gibson got the job, the West Virginia defense improved drastically right away.

In Feldman’s piece, he quoted one of Holgorsen’s assistants, and apparently “a high percentage of Dana’s interviews have taken place at Demeris Bar-B-Q.” Whether they include football or not is unknown, but there’s no doubt that they involved a lot of beers.