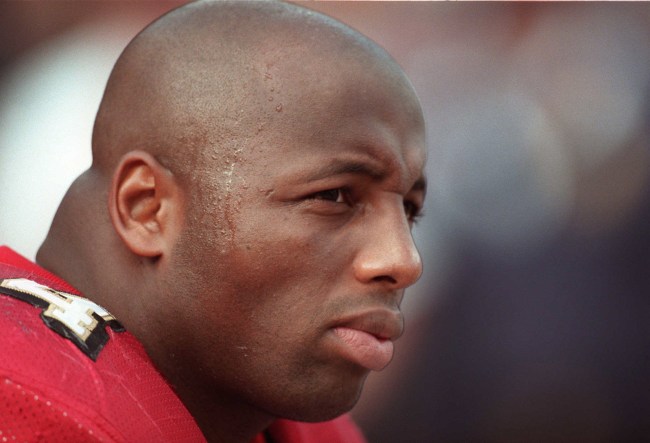 Today it was confirmed that one of my favorite defensive players of the 90s is a complete and total dirtbag.

Super Bowl champion and three-time Pro Bowler Dana Stubblefield was found guilty of rape on Monday after a nine-month trial and five years after the victim reported the 2015 sexual assault to authorities.

The details of the incident are chilling.

According to ESPN, the 49-year-old lured a then 31-year-old woman with developmental disabilities to his California home under the guise of a babysitting interview. Investigators said the interview lasted about 20 minutes, but the woman later returned to the former 49ers home when she received a text from Stubblefield saying that he wanted to pay her for her time that day.

It was then that Stubblefield raped the woman, giving her $80 in cash before sending her on her way.

The woman immediately went to the Morgan Hill Police Department and reported the rape, giving the money to the department as well.

The jury reportedly found Stubblefield guilty of rape by force, oral copulation by force and false imprisonment and acquitted him of raping a person incapable of giving consent. Jurors also found that Stubblefield used a gun during the assault. He could face 15 years to life in prison.

“This was a triumph of resilience,” Santa Clara County District Attorney Jeff Rosen said in a statement. “The victim has struggled her whole life with learning disabilities and challenges to be self-sufficient. If we are not fighting for her, then who are we fighting for?”

Stubblefield’s defense attorneys argued that the incident was nothing more than a “paid encounter for sex.”

“There’s a lot of information that we have that the jury was not allowed to have that we think would have been impactful to their decision,” Sawyer told the San Fransisco Chronicle on Monday after the verdict was read.

“We expect to keep fighting for Mr. Stubblefield’s innocence,” Sawyer said. “We will clear his name, and we look forward to fighting this out in the courts. This is just the first battle.”

This isn’t the first public run-in with the law for Stubblefield. In 2009, he pleaded guilty to lying to federal officials investigating a performance-enhancing drugs ring for professional athletes. A year later, he was sentenced to 90 days in jail after pleading guilty to stealing his ex-girlfriend’s mail by submitting a fraudulent change of address for her to the Post Office.