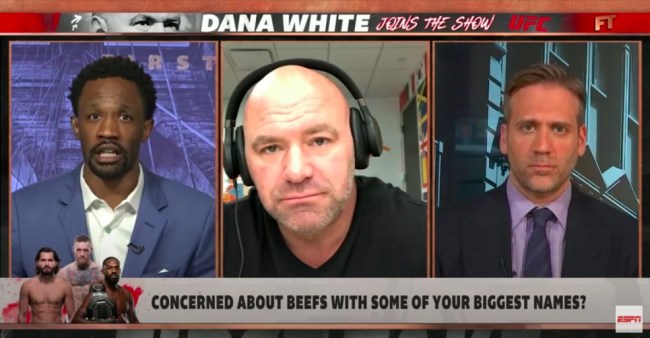 The interrogation of Dana White continues, as both his own fighters and sports talking heads question the UFC founder over complaints about pay.

Within the last week, White, who is worth an estimated half billion dollars, has taken shots from Jon Jones and Jorge Masvidal about questionable compensation structures tied to their upcoming fights.

Masvidal claimed the UFC offered him less money to fight for the welterweight title against Kamaru Usman than the haul he received for his previous fight against Nate Diaz, while also taking issue with fighters making a much smaller percentage of revenue when compared to other major sports leagues like the NFL or NBA. Jones, who White himself claims to be without question the best UFC fighter of all-time, was essentially told to piss off in the wake of his request for higher pay for a potential heavyweight fight against Francis Ngannou.

Laughing my ass off at the chaos this caused. pic.twitter.com/FuJy3DEhe8

“Does anybody feel like they make too much money? Nobody does. If we were talking about a thing where these guys had old contracts from three years ago and it’s like ‘that was three years ago that I did this deal, let’s [renegotiate].’ They signed these less than a year ago. This was months ago.

By the way, I don’t know if you know this but we’re in a pandemic and no other sports are going. Oh, by the way, every other sport out there is arguing about money right now. I haven’t laid off one employee. I haven’t asked any of my fighters to take less money, and you don’t hear me out here crying about, ‘No, I don’t get any gates, I don’t have this, I don’t have [that].’ You don’t hear me crying about anything. I’m running my business. I’m paying everybody. Right now, if you think it’s easy to be a business owner right now here in today, you are right out of your mind. There has never been a harder time to do business than right now. Guess what? I’m pulling it off.”

On his recent podcast, UFC guy Joe Rogan spoke about how the issue is more complex than right and wrong.