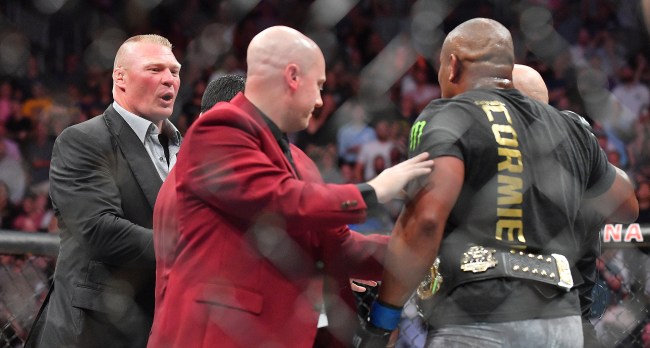 After Daniel Cormier’s first-round knockout victory over Stipe Miocic at UFC 226 last July, Brock Lesnar entered the octagon to challenge the UFC Heavyweight and Light Heavyweight champion to a fight.

Cormier, at 40-years-of-age, was looking for one final big payday so he was more than willing to take on Lesnar for the heavyweight belt.

Fans of the UFC were also down with Lesnar returning, especially after all the smack talk between The Beast and Jon Jones never materialized into an actual fight.

In April of last year, UFC President Dana White even went so far as to say Lesnar was “definitely coming back to the UFC.”

And once again, no fight was ever actually put on the UFC schedule.

Eventually, Lesnar decided to not return to MMA and signed a new deal with WWE. Many, including Cormier, speculated that the reason Lesnar spurned the UFC was because of the company’s new deal with ESPN.

“I’m sure Brock couldn’t come to terms with the UFC, in terms of financial offer. There’s a lot of uncertainty in the world of mixed martial arts right now in terms of pay-per-view,” Cormier told Marc Raimondi of ESPN in May. “It’s not as straight forward as when Brock was there. I think when Brock looked at the landscape of the sport, what they were offering him, Brock said, ‘I can make guaranteed money [in WWE].'”

On Thursday, White was asked (by ESPN) if the new pay-per-view deal with ESPN+ had anything to do with Lesnar not returning to the fold, and whether it has anything to do with the fact that Conor McGregor hasn’t fought since his loss to Khabib last October.

“Completely not true, that’s absolutely false,” said White. “And if you really look at when we were on pay-per-view, everybody was talking about how the pay-per-view business is dying. Nobody could pull numbers anymore. Really? We were still pulling five to seven million pay-per-view buys a year. You can’t listen to any of this noise. That’s not why Brock Lesnar didn’t fight. Brock Lesnar got a better deal [at WWE] is basically what happened for Brock.

“Conor McGregor. What did I say leading up to the Mayweather-McGregor fight? How many times has he fought since then? Once. Conor is in a very unique position as a fighter. He has tons of money, his whiskey business is off the charts. Conor now has the ability to be very calculated, sit back and play the game how he wants to. There’s so much more to this than people speculate.”

So there you have it. Any other questions? If so, watch White’s entire fascinating interview below and they might be answered.