Dana White Says That If Conor McGregor Makes Contact With Floyd Mayweather, He Will Knock Him Out 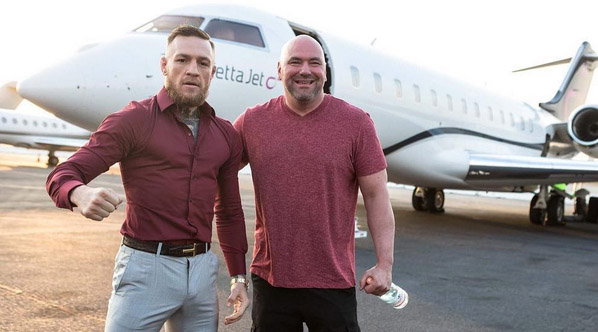 It is in UFC president Dana White’s best interest to make a counterpoint to the general public consensus that the McGregor/Mayweather boxing match on August 26th is more than just a vastly intriguing money grab gimmick. Mayweather has a career boxing record of 49-0, whereas you and I have the same professional boxing record as Conor McGregor. Even the biggest talking head contrarians cannot with a straight face say they believe that Conor McGregor can beat one of the best boxers of all time at his craft.

Even McGregor’s old trainer at Crumlin Boxing Club in Ireland admitted “I can’t see him winning it, but I’ll definitely be shouting for him.”As the odds stand now, a bettor would have to throw down $750 on Mayweather to make $100. But, if Dana White plants the seed in the head of the general public that there’s a way that the south paw can pull out the victory, intrigue will rise and so will the $99.95 pay-per-view numbers.

So, on Tuesday’s edition of the ‘Undisputed’ on FS1, Dana White made some bold claims about what could go down at the T-Mobile Arena in Las Vegas next month, framing his argument around the fact that Floyd Mayweather is more than a decade older than his guy.

"If Conor McGregor connects with Floyd Mayweather, I guarantee you he will hurt him, and if he hurts him, he will knock him out" —@danawhite pic.twitter.com/cSlK40E9Qh

Well in that case, I guess I’ll throw the family farm on McGregor. Just kidding, I prefer not to be homeless.