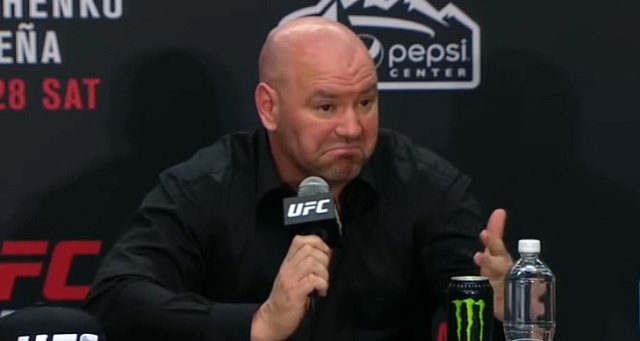 It seems like Dana White and the UFC are ready to go war with Conor McGregor if he wants to fight Floyd Mayweather without their approval.

Last night, Conor McGregor spoke with Ariel Helwani of MMAFighting.com at an event in Manchester called ‘An Experience With Conor McGregor’.about his intentions to fight Floyd Mayweather with or without the UFC’s approval.

Me and Floyd have got to get together and figure it out, the same way Floyd and Manny figured it out,” McGregor told Ariel Helwani during an hour long interview in front of thousands of fans. “Once we come to a set number that I’m happy with, that he’s happy with. Then we go to the customers, we go to the promoters, the buyers. And then we get it done. That’s next. I’ll go to Vegas and I’ll handle the commission, we’ll figure that situation out. And we’ll come to a dotted line and then we’ll go. But this is happening.

When asked if he could fight Mayweather without the UFC’s approval.

“I believe so, with the Ali act I believe I can,” he said, referring to a federal US law put in place to stop promoters from restricting boxers from competing. “But I think it’s smoother with all involved. I think we’re all about good business. I’ve done great business with the UFC, with Dana and everyone. But again, everyone’s gotta know their place. So we’ll cross that bridge when we come to it.”

Before the event, McGregor shot off an Instagram post with the caption “Fuck the UFC, fuck Floyd Mayweather, fuck Hollywood, fuck you too, pay me”.

Dana White responded to Conor’s comments at last night’s UFC on Fox postfight press conference and threatened the UFC star that if he wanted to go down that road he should expect an ‘epic fall”.

Dana White: I've always shown #Conor nothing but respect & if he wants to go down that road with us. Let me tell you, it'll be an epic fall.